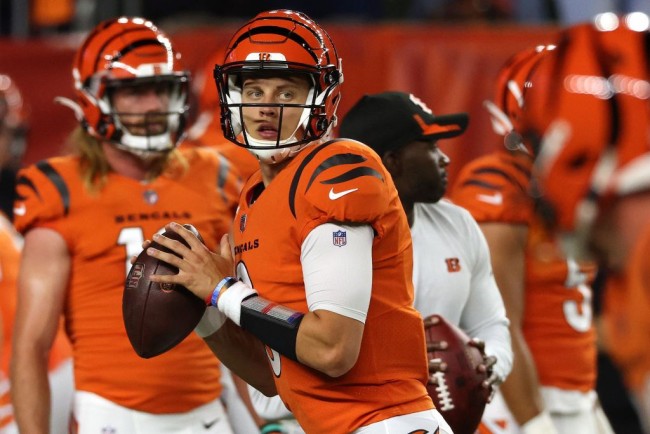 CINCINNATI, OHIO – Joe Burrow (#9) of the Cincinnati Bengals warms up against the Jacksonville Jaguars before an NFL football game at the Paul Brown Stadium on September 30, 2021 in Cincinnati, Ohio. (Photo : Dylan Buell/Getty Images)

The Cincinnati Bengals continued their hot start to the season on Thursday night, beating the Jacksonville Jaguars, 24-21, to improve their overall record to 3-1. Evan McPherson kicked the game-winning 35-yard field goal as time expired to give the Bengals their first 3-1 start since 2018.

Joe Burrow starred in this come-from-behind win by Cincinnati. The Bengals quarterback completed 25 of 32 passes for 348 yards and two touchdowns. Burrow was sensational in the second half, leading Cincinnati on four straight scoring drives during this period to turn a 14-0 deficit into a 24-21 victory in the end.

Burrow got some much-needed help from tight end C.J. Uzomah, who scored a pair of touchdowns, including a critical 31-yard score that knotted the game at 21 points apiece in the fourth quarter.

#Bengals QB Joe Burrow says he audibled for a screen to CJ Uzomah to set up the game-winner: “You guys have heard me talking about knowing the playbook in the back of my head… I know their defensive coordinator (Joe Cullen) has a Baltimore background.” pic.twitter.com/dF1RxoRYxc

It was a disappointing defeat for the Jaguars, who have now lost 19 games in a row. The Jaguars looked like they would snap that skid against the Bengals, quickly establishing a 14-point advantage in the first half. The Jaguars’ offense was firing on all cylinders to start the game, tallying nine first downs on their first 19 plays.

Momentum, however, swung in Cincinnati’s favor in the final minute of the second quarter, when the Bengals’ defense stopped Jacksonville on 4th-and-goal at the one-yard line. Instead of heading into the break with a healthy 21-0 lead, the Jaguars had to settle for a two-possession advantage.

The Bengals made the Jaguars pay for that wasted opportunity as they played some inspired football in the second half. Cincinnati outscored Jacksonville, 24-7, in the game’s final 30 minutes. The Bengals dominated in the total yards department, outgaining the Jaguars, 420-341.

It was a gut-wrenching loss, particularly for Trevor Lawrence, who played the best NFL game of his career thus far. The former Clemson standout completed 17 of 24 passes for 204 yards and added 36 yards and a score on the ground. He also did not record a single interception, a huge surprise, given that he had thrown a record seven picks in his first three games as a Jaguar.

Trevor Lawrence shows off his quickness 👀

Thursday’s loss marks the first four-game losing streak in Urban Meyer’s storied career as a football head coach. Jacksonville’s 0-4 record also means that Lawrence’s loss total in the NFL has already matched his number of defeats in college and high school. He lost only twice in 54 games back in high school and suffered the same number of defeats in 36 college football games with Clemson.