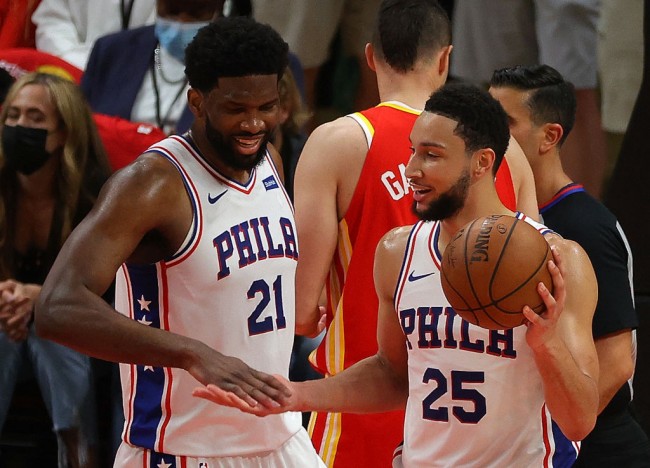 ATLANTA, GEORGIA – Ben Simmons (#25) and Joel Embiid (#21) of the Philadelphia 76ers react during the second half of game 3 of the Eastern Conference Semifinals at the State Farm Arena on June 11, 2021 in Atlanta, Georgia. (Photo : Kevin C. Cox/Getty Images)

Joel Embiid isn’t a fan of the ongoing dispute between the Philadelphia 76ers and their star player Ben Simmons. The Sixers star called the situation with his disgruntled teammate disappointing and borderline disrespectful to the franchise.

Embiid’s comments came after news site The Athletic reported that Simmons felt his partnership with the big man had run its course for the Sixers. Simmons has yet to report for the Sixers’ training camp, carrying out his threat to hold out until Philadelphia trades him.

Embiid didn’t mince words when speaking to reporters about Simmons at training camp on Thursday. “The situation is disappointing, borderline kind of disrespectful to all the guys that are out here fighting for their lives.”

Embiid also refuted Simmons’ reported argument that Philadelphia chose to build its team around the All-NBA big man in a way that does not fit the Australian star’s playing style. Embiid maintained that it was the other way around, with the Sixers catering to Simmons’ needs and the team always finding ways to accommodate him.

“I feel like our teams have been built, whether it’s the shooting need or stretch-5 and all that stuff, I feel like [Ben Simmons] always had it here. And we still have it.” Embiid went on to list the 3-point shooters the Sixers have on their roster before saying, “Our teams have always been built around his needs.”

Embiid brought back old wounds when discussing the said topic, referencing the controversial 2019 offseason by the 76ers. That year, the Sixers decided to let Jimmy Butler go to the Miami Heat and sign big man Al Horford instead. Embiid said that they signed Horford and got rid of Butler to make sure Simmons had the ball in his hands.

How much will the Sixers fine Simmons?

Embiid, up to this day, believes the Sixers made a huge mistake in letting Butler go, but that was the decision they made. While Embiid still believes Philadelphia is a better team with Simmons around, the Cameroonian star said it’s time for the Sixers to focus on what they have right now.

“We are a better team with him, there’s no question about it. We still hope he changes his mind, but I kind of owe it to these guys to worry about what we have here.”

All eyes are on Simmons, though, who has four years and $147 million remaining on his max contract, including $33 million for the 2021-22 season. Should Philadelphia choose to suspend Simmons, he stands to lose $227,000 for each exhibition and regular-season game that he will miss up to the 20th game of the season. That figure will rise to $300,000 for games 21-82.

Top Robotics Internships in India for this October

10 Ways by Which Big Data Can Save Our Environment