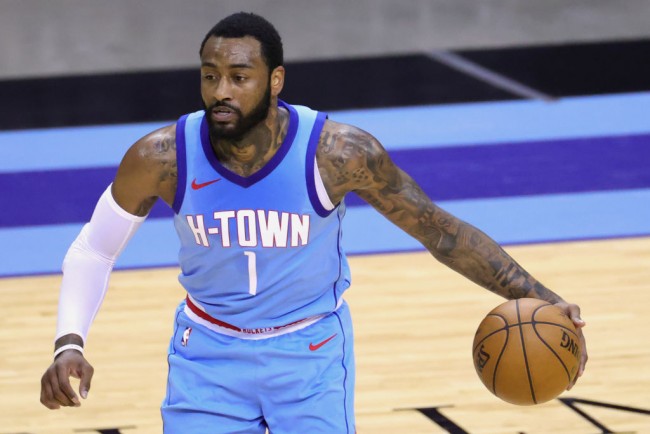 HOUSTON, TEXAS – John Wall of the Houston Rockets controls the ball during the third quarter against the Indiana Pacers at the Toyota Center on April 14, 2021 in Houston, Texas. (Photo : Carmen Mandato/Getty Images)

John Wall’s time with the Houston Rockets has come to an abrupt end. Sources have told ESPN that both parties have agreed to work together to find a new trade destination for the veteran point guard, with the Rockets moving ahead with their plans to pair Kevin Porter Jr. and Jalen Green as their starting backcourt for the 2021-22 NBA season.

Wall’s huge contract a problem for Houston in trade talks

Houston’s commitment to the young duo leaves Wall without a starting role in the Rockets franchise. The five-time All-Star is not expected to play for the Rockets anymore in the future as Wall and Houston’s top brass mutually decided that a bench role for the 31-year-old star wouldn’t be beneficial for him and the organization.

Trading Wall, however, would be problematic for the Rockets given the huge amount of money he is still owed in his contract. Wall is due to earn $91.7 million over the next two years, including a player option for $47.4 million in the 2022-23 campaign.

The only way the Rockets can entice other teams to trade for Wall is if they also include a first-round draft compensation, which according to sources, isn’t in Houston’s plans at the moment. The Rockets would go that route only after free agency next summer in terms of a possible contract buy-out.

It doesn’t help the Rockets’ cause that Wall has been saddled with injuries the past four seasons. He has been limited to just 113 games during that stretch as he suffered a series of major injuries, including a torn Achilles tendon that ruled him out for the entire 2019-20 season, which was his final year with the Washington Wizards.

Wall remains a force to be reckoned with, though, when healthy, averaging 20.6 points, 6.9 assists, 3.2 rebounds, and 1.1 steals in 40 games played for the Houston Rockets last season. Even though he is out of the Rockets’ lineup for next season, Wall is still expected to report for training camp.

The Rockets management remains optimistic that Wall will provide much-needed wisdom and leadership to Porter Jr. and Green during this time, which is crucial given that they are just 20 and 18 years of age, respectively.

High-ranking Houston franchise members have praised Wall for his leadership during a turbulent 2020-21 season, which saw superstar James Harden leave the Rockets and push the team into an unexpected rebuild.

With Wall on the trading block, the Rockets will head into next season with Christian Wood as the cornerstone of their franchise. Last season, the 25-year-old proved to be an excellent acquisition for Houston, averaging 21.0 points and 9.6 rebounds in 41 games played.

Do We Have A Backup Plan If Artificial Intelligence Causes Unemployment?