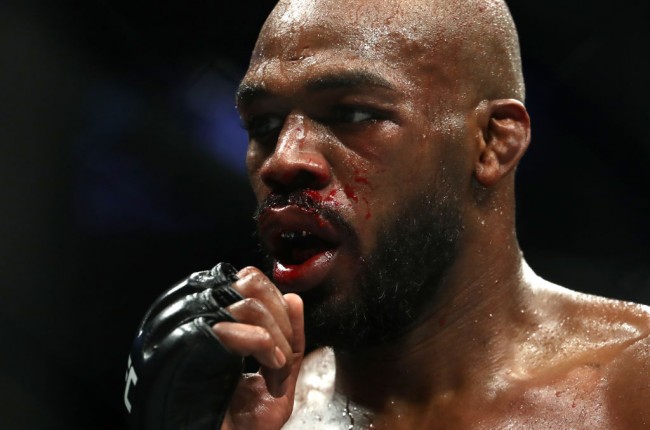 HOUSTON, TEXAS – Jon Jones in his fight against Dominick Reyes in their UFC Light Heavyweight Championship bout during UFC 247 at the Toyota Center on February 08, 2020 in Houston, Texas. (Photo : Ronald Martinez/Getty Images)

Jon Jones grabbed the headlines for the wrong reasons on Friday morning after the Las Vegas Police Department arrested the UFC star on charges of misdemeanor battery domestic violence and injuring or tampering with a vehicle, which is a felony offense. Jones’ arrest came just hours after his past UFC fight was inducted into the UFC Hall of Fame.

Jones detained in Vegas with bail set at $8,000

According to Las Vegas Metro PD officer Larry Hadfield, Jones was arrested at a resort near Las Vegas Boulevard and Flamingo Road at 5:45 a.m. on Friday. Online inmate records show that Jones is currently being detained at Clark County Detention Center, with his total bail set at $8,000. Jones, who is on a 12-hour hold, is scheduled to appear in Las Vegas Justice Court on Saturday at 1:30 p.m.

This isn’t the first time that Jones has run afoul of the law. The 34-year-old avoided jail time in 2015 after leaving the scene of a hit-and-run accident. UFC then stripped Jones of his light heavyweight title three separate times for failing banned substance tests and also as a disciplinary response.

He also faced a misdemeanor battery charge stemming from a strip club incident in Albuquerque, New Mexico, in April 2019. Albuquerque police then arrested Jones for alleged aggravated-DWI and negligent firearm use in March 2020.

Jones’ adviser Richard Schaefer issued a statement on Friday, telling ESPN‘s Mike Coppinger that the facts are still developing and they don’t know the whole story yet. Schaefer said, “I’m not going to make any comment until I have a chance to talk to Jon and until we see how this plays out.”

Dana White disappointed with Jon Jones after his latest arrest

One guy who is disappointed with Jones’ latest arrest is UFC president Dana White. He said that it’s hard to bring Jones to Las Vegas and that the city is not good for the embattled UFC star. White later added that he isn’t shocked anymore that Jones was arrested in Vegas, saying, “When we bring him here, it’s almost expected. It’s a problem. This guy’s got a lot of demons, man, a lot of demons.”

White had big plans for Jones before his arrest, with a possible heavyweight title shot on the horizon for the former UFC light heavyweight champion. Jones told ESPN before the UFC Hall of Fame ceremony on Thursday night that his current weight was already at 255, and he was looking to add 15 more pounds for his heavyweight debut.

That fight indeed will not happen anytime soon with Jones facing a bunch of charges. Jones was in Las Vegas for the induction of his epic 2013 fight with Alexander Gustafsson into the Hall of Fame.

Top Machine Learning Projects that Can be Done Using Python