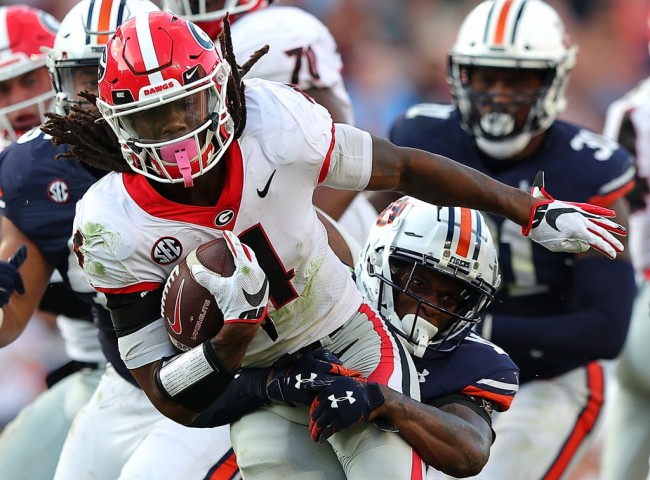 AUBURN, ALABAMA – James Cook (#4) of the Georgia Bulldogs rushes against Zion Puckett (#10) of the Auburn Tigers during the second half at the Jordan-Hare Stadium on October 09, 2021 in Auburn, Alabama. (Photo : Kevin C. Cox/Getty Images)

The Georgia Bulldogs and the Kentucky Wildcats will put their unblemished records on the line when they square off in a mouth-watering SEC showdown at the Sanford Stadium this coming Saturday. Which team will emerge with a perfect 7-0 slate in this Kentucky vs Georgia clash?

There is just no stopping Kentucky right now. The Wildcats kept their unbeaten record intact with a 42-21 victory over the LSU Tigers in Week 6. With the win, Kentucky improved to 6-0 for the first time since 1950.

Will Levis starred for the Wildcats in the one-sided win, accounting for five total touchdowns against the Tigers. He was highly efficient through the air, completing 14 of 17 passes for 145 yards with three touchdowns and no interceptions. Levis also wreaked havoc on the ground, rushing for 75 yards and two scores on 11 carries against LSU.

Kentucky’s masterful performance was duly rewarded as the Wildcats jumped five spots to No. 11 in the AP Top 25 poll ahead of Week 7. Things are bound to get more challenging for the unbeaten Wildcats as the mighty Georgia Bulldogs are standing in their way in the next game.

The Wildcats had lost each of their last 11 meetings against the Bulldogs dating back to 2010. The Wildcats will be without some of their key starters for the game against Georgia to make matters worse for Kentucky.

Defensive lineman Octavious Oxendine suffered a lower leg injury in the win against LSU and will be sidelined for the remainder of the season. He had two sacks against the Tigers before his injury. Defensive tackle Marquan McCall and wide receiver Josh Ali are expected to be out as well in this crunch Week 7 showdown.

Georgia’s sizzling start continued in Week 6 with an emphatic 34-10 victory over Auburn at Jordan-Hare Stadium. It was a huge result for the Bulldogs, who improved their season record to a perfect 6-0 slate. With their win against the Tigers and Alabama’s defeat to Texas A&M, Georgia jumped up to No. 1 in the AP Top 25 poll.

Leading the way for Georgia in this contest was its impeccable defense. The Bulldogs sacked Bo Nix four times and pressured him the entire afternoon. Auburn’s ground game failed to get going as well, rushing for just 46 yards on 29 carries against Georgia’s vaunted defensive line.

Even though the Bulldogs gave up their second touchdown of the year in the win against Auburn, Georgia remains the nation’s leading defensive team. They have allowed an average of just 5.5 points per game this campaign. This season, the Bulldogs have recorded two shutout wins, blanking Vanderbilt and Arkansas in Weeks 4 and 5.

There is still some injury concern, however, regarding Georgia’s starting quarterback JT Daniels. He was sidelined for the second week running against the Tigers with a lat injury and is still a major doubt for Saturday’s game against Kentucky.

The good news for Georgia is that Stetson Bennett is stepping up big time in Daniels’ absence. He passed for 231 yards and two touchdowns in Week 6 to give Georgia its fifth consecutive win in the Deep South’s Oldest Rivalry.

Top 10 Cryptocurrencies to Buy this October Weekend for High Returns