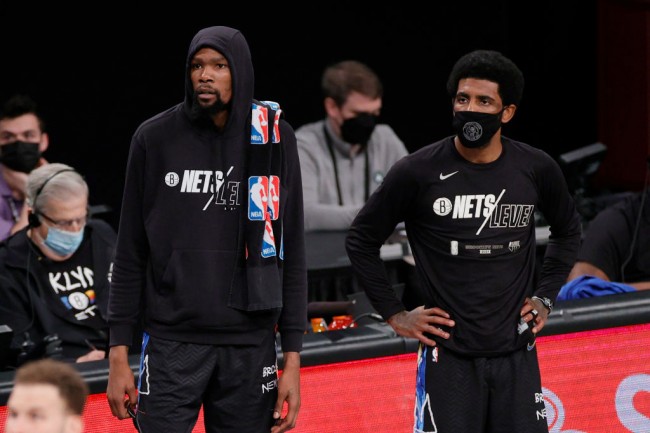 NEW YORK, NEW YORK – Kevin Durant (L) and Kyrie Irving of the Brooklyn Nets look on during the first half of Game Five of their Eastern Conference first-round playoff series against the Boston Celtics at the Barclays Center on June 01, 2021 in the Brooklyn borough of New York City. (Photo : Sarah Stier/Getty Images)

Kevin Durant remains confident that Kyrie Irving will be part of Brooklyn’s title pursuit this season despite his unvaccinated status, telling reporters on Wednesday that he’s still envisioning the seven-time All-Star playing for the Nets.

The Nets are in a quandary regarding Irving, who missed his second straight day of practice due to New York’s health and safety protocols. He is barred from practicing in Brooklyn as the city’s strict COVID-19 protocols only allow players to play with at least one vaccination shot.

According to ESPN‘s Adrian Wojnarowski and Brian Windhorst, the Nets still have no clue about Irving’s vaccination plans, a worrying development given that the start of the NBA season is just a couple of weeks away. The Nets’ optimism that Irving would get the COVID-19 jab and meet New York’s mandates is waning fast.

The Nets still have not decided on whether they will accommodate Irving as a part-time player this season. They are preparing for the possibility that he will be sidelined for the foreseeable future in their upcoming home practices and games.

When asked if the Nets can cover for Irving if he misses extended time this season, Durant said, “I’m envisioning Kyrie being a part of our team. Maybe I’m just naïve, but that is just how I feel.” Durant added that everybody in the Nets organization had confidence that they could do something special if they kept building.

Durant made it clear, however, that Irving is still integral to Brooklyn’s championship aspirations. Durant said that Irving is a “special player so it is going to be hard to duplicate what he brings.” The Nets will need to step up, though, in Irving’s absence, with Durant saying that “professional sports are about the next man up mentality.”

Durant said he still wants Irving to be part of the group, but a lot of the stuff is out of their control, and they will just let him figure that out for himself. One thing that Durant said he would not do is to force Irving to get vaccinated.

Durant admits that he’s not trying to get involved in the issue, saying this is Irving’s personal decision on his wellbeing. Durant added that this is way bigger than hoops and that they all respect Irving’s decision regarding the matter. As one of the leaders of the team, Durant said his role is to support Irving with his choices.

Unfortunately for Durant and the rest of the Nets, Irving’s choice would be problematic for them in the long run. The Nets will be tested early as they will have a six-game homestand starting the second week of the season. The Nets will be at home for 20 out of 26 days during one stretch in November and December, with Irving set to miss Brooklyn’s practices and games over that period.

Hurry Up! Invest in these Cryptocurrencies for Better Returns!