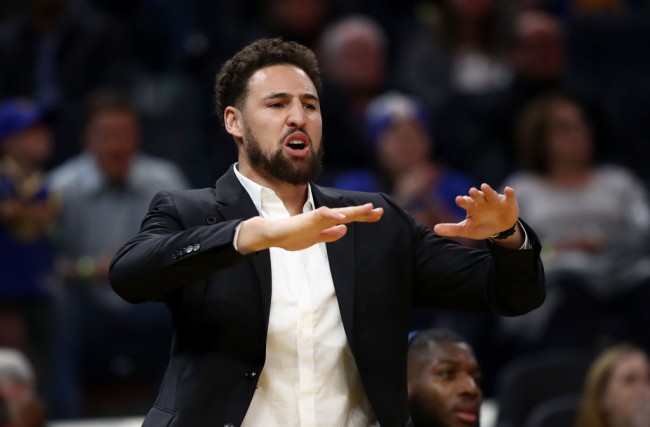 SAN FRANCISCO, CALIFORNIA – Injured Klay Thompson of the Golden State Warriors reacts on the bench after the Warriors made a basket against the Oklahoma City Thunder at Chase Center on November 25, 2019 in San Francisco, California. (Photo : Ezra Shaw/Getty Images)

Klay Thompson and Dwight Howard expressed their displeasure after they were left off the NBA’s 75th Anniversary Team on Thursday. Some 26 new names were added to the NBA’s 50 greatest list that the league unveiled back in 1996, but much to Thompson and Howard’s surprise and disgust, they did not make the cut despite their impressive accolades and individual achievements.

Thompson did not mince any words in his social media post about his omission, writing on Instagram, “Maybe I’m just naive in my ability to play basketball, but in my head, I’m top 75 all-time.”

He woke up Friday still feeling irate about the snub, telling his followers in a now-deleted Instagram story, “Woke up this AM, still pissed about this stupid a** list. Ga damn I can’t wait to hoop again. Sick of the disrespect. Winning isn’t everything to some people like it is to me I guess.”

Talking to Bleacher Report about his controversial snub, Howard echoed those sentiments, saying, “Disrespectful.” Howard’s frustration is warranted, given his impressive resume. He is an eight-time All-Star and a 2020 NBA champion with the Los Angeles Lakers. Howard is also a five-time All-NBA First team player and one of only four players in the league’s history with three or more NBA Defensive Player of the Year honors.

An argument can definitely be made that Howard deserved a spot in the top 75 than his Lakers teammate Anthony Davis. Howard has more All-NBA selections (8) than any other player left off the NBA’s 75th Anniversary Team, making his omission even harder to take.

Fans and pundits were shocked when Thompson was left off the list, given his outstanding exploits for the Golden State Warriors. He helped the Warriors win three NBA titles in 2015, 2017, 2018, forming a lethal partnership with Splash Brother Stephen Curry. He is a five-time All-Star, an All-Defensive Second Team member, and a two-time All-NBA Third Team member.

Thompson is undoubtedly one of the league’s greatest shooters, making his omission from the league’s 76 greatest players hard to justify. Thompson shot 42 percent from beyond the arc through his first eight seasons, higher than Reggie Miller’s 39 percent shooting clip from deep in his career. Thompson shot the lights out in the postseason as well, knocking down 41 percent of his 3-point attempts in the playoffs.

An argument can also be made that Thompson is more deserving of a spot in the top 75 than Portland Trail Blazers star Damian Lillard. Thompson has a more distinguished resume than Lillard, who has yet to reach the NBA Finals in his career. He got some support from his head coach Steve Kerr, who said that Thompson and Draymond Green should have been included in the top 75 because of their contributions to Golden State’s championship run.