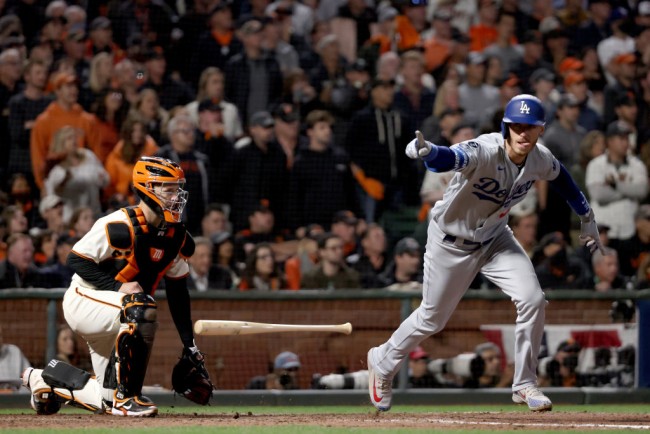 SAN FRANCISCO, CALIFORNIA – Cody Bellinger (#35) of the Los Angeles Dodgers celebrates his RBI single to score Justin Turner (#10) against the San Francisco Giants during the ninth inning in game 5 of the National League Division Series at the Oracle Park on October 14, 2021 in San Francisco, California. (Photo : Harry How/Getty Images)

The Los Angeles Dodgers are moving on to the National League Championship Series after beating the San Francisco Giants, 2-1, in Game 5 of the National League Division Series at the Oracle Park. It was a nerve-wracking win for the Dodgers, who will now appear in their fifth league championship series in the last six years.

Cody Bellinger starred for the Dodgers in the winner-take-all match, hitting an RBI single off Giants closer Camilo Doval in the top of the ninth inning to give Los Angeles a 2-1 lead. Bellinger’s single scored Justin Turner, who reached base after Doval plunked him with one out in the ninth.

That one-run lead was good enough for Max Scherzer, who came out of the bullpen in the bottom of the ninth for a surprise relief appearance. He recorded his first career save to seal the series win for the Dodgers.

Controversy surrounded the game’s final out after umpire Gabe Morales called Wilmer Flores out on a check-swing. Television replays showed that was not the case, with Flores checking his swing on Scherzer’s final pitch. The game’s bizarre ending added to the frustration of the Giants, who saw their historic 107-win regular season come to a disappointing finish in the NLDS.

The Dodgers’ narrow win vindicated manager Dave Roberts‘ decision not to start Julio Urias in this knockout game. Roberts opted to use relievers Corey Knebel and Brusdar Graterol as his openers, a decision that paid dividends with both pitchers combining for two scoreless innings.

Urias entered the game in the third inning and was superb as well, allowing just one run on three hits in four innings of action to keep Los Angeles in the game. Roberts needed the trio to be outstanding in Game 5 as Giants’ starting pitcher Logan Webb was phenomenal again in the series decider.

Like in the series opener, Webb dominated Dodgers hitters in Game 5, surrendering just one run on four hits in seven innings with seven strikeouts. The only batter that gave him problems on Thursday was Mookie Betts, who had a postseason career-high four hits, three of which came against Webb.

Next up for the Dodgers is a meeting with the Atlanta Braves in the NLCS. In last year’s league championship series, the same two teams faced each other, with the Dodgers pulling off the victory in a seven-game thriller. The Braves will be hungry for payback after they squandered a 3-1 lead in that series against the Dodgers.

Game 1 of the NLCS will begin on October 16 at the Truist Park. Even though the Dodgers have more regular-season wins than the Braves, Atlanta will enjoy home field advantage in this series as LA entered the postseason as a wild card team.