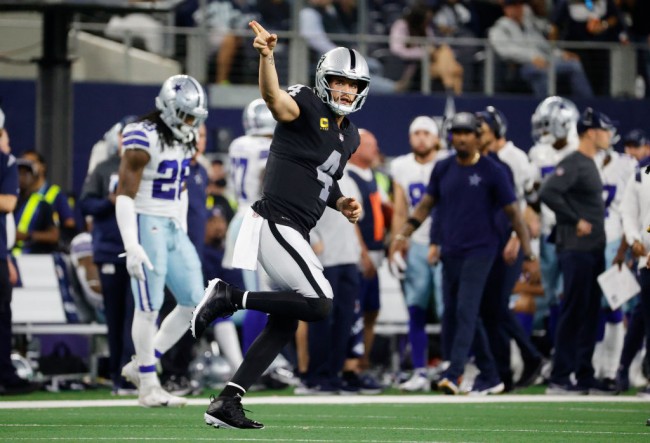 In a Thanksgiving Day thriller, the Las Vegas Raiders finally snapped their three-game losing skid with a nerve-wracking 36-33 overtime win over the Dallas Cowboys. Daniel Carlson kicked the game-winning 29-yard field goal with 4:28 remaining in overtime to give the Raiders their sixth win of the season.

Las Vegas bolstered its playoff bid with the victory as the Raiders are now just one game behind leaders Kansas City Chiefs in the AFC West standings. Derek Carr played a huge part in the Week 12 win, completing 24 of 39 passes for 373 yards with one touchdown and no interceptions. Las Vegas is now 28-3 when scoring at least 30 points under Carr and 6-1 in overtime games.

The victory came at a considerable price for the Raiders as Pro Bowl tight end Darren Waller suffered a left knee injury after getting tackled by Jayron Kearse during the second quarter. Waller caught two passes for 33 yards before his exit.

Fortunately for Vegas, Zay Jones stepped up big time in Waller’s absence, grabbing a season-high five catches for 59 yards. He also drew the pass interference penalty against Anthony Brown at the Cowboys’ 24-yard line during overtime that helped set up Carlson’s game-winner.

It was a rough day in the office for Brown, who committed a total of four pass interference fouls, which resulted in 91 penalty yards. Apart from the 33-yard penalty he committed while covering Jones in overtime, Brown was also penalized 11 yards in his coverage of Bryan Edwards.

He was also handed two penalties when covering DeSean Jackson, committing a 30-yard foul and a 17-yard infraction. Brown’s miscues were a complete surprise as he had only committed one penalty this season before Thursday’s game against the Raiders. That came in the game against the Minnesota Vikings when he committed an illegal contact foul.

Even with those penalty yards, the Cowboys were able to produce a late comeback and force overtime. Dak Prescott led the way for the Cowboys in the fourth quarter, throwing 209 of his 375 passing yards during this period. That helped Dallas turn a 27-19 deficit into a 33-tie at the end of regulation.

Prescott was not able to replicate his heroics in overtime, however, as the Cowboys were forced to punt in their opening drive. The Raiders took full advantage, dealing Dallas a massive blow on its bid to secure the top seed in the NFC.

How is Computer Vision Used in Marketing?