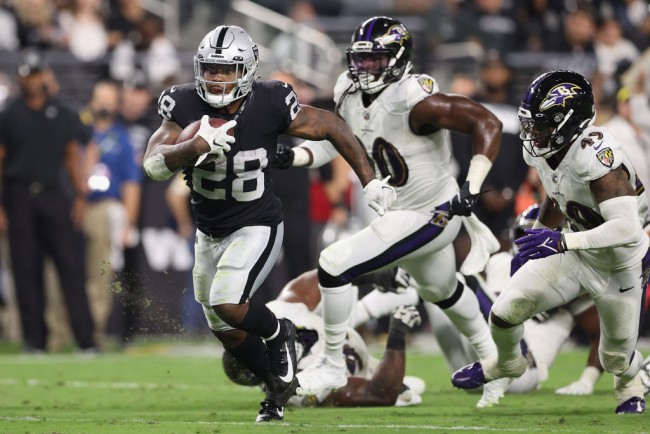 LAS VEGAS, NEVADA – Running back Josh Jacobs (#28) of the Las Vegas Raiders rushes the football against the Baltimore Ravens during the NFL game at Allegiant Stadium on September 13, 2021 in Las Vegas, Nevada. The Raiders defeated the Ravens 33-27 in overtime. (Photo : Christian Petersen/Getty Images)

Fantasy owners of Josh Jacobs got some unfortunate news on Friday as the Las Vegas Raiders ruled the running back out of Sunday’s game against the Pittsburgh Steelers. The Pro Bowler missed practice the entire week due to ankle and toe injuries, forcing the Raiders to sit him out in Week 2.

Jacobs played a crucial role in Las Vegas’ thrilling 33-27 overtime victory over Baltimore on Monday night, with the 23-year-old scoring a pair of touchdowns against the Ravens. His rushing numbers weren’t that impressive, though, running for just 34 yards on 10 carries.

Peyton Barber gets the start for Vegas in Week 2

On Friday, Raiders coach Jon Gruden revealed that Peyton Barber would get Jacobs’ reps against the Steelers. The Raiders just signed Barber on September 4 to shore up their running back ranks. With Barber taking Jacobs’ place in the lineup, veteran Kenyan Drake will continue playing his role as the Raiders’ primary pass-catching back out of their backfield.

Gruden praised Barber in his press conference, saying, “he’s a heck of a back.” Gruden particularly likes Barber’s runs and catches and how he picks up the opposing team’s blitzes. He later added that the Raiders are excited with this opportunity to see what they have in Barber.

Barber had 94 carries in 16 games for Washington last season, rushing for 258 yards and four touchdowns. His best season came in 2018 while playing for the Tampa Bay Buccaneers, rushing for a career-high 871 yards in 16 starts.

That being said, losing Jacobs is still a major blow for a Raiders offense that will have to contend with Steelers star linebacker T.J. Watt this coming Sunday.

Jacobs has been a vital cog for the Raiders the past two years, rushing for at least 1,000 yards in each of his first two seasons in the NFL.

Jacobs a major loss for the Raiders’ offense

Jacobs’ durability has been his biggest asset, with the Tulsa native yet to miss a game because of injury before Friday’s announcement. Jacobs missed three games as a rookie back in 2019, rushing for 1,150 yards and seven touchdowns and averaging 4.8 yards per carry. Jacobs then missed just one game last season, running for 1,065 yards and 12 touchdowns. His average in the yards-per-carry department dropped, however, to 3.9 in 2020.

It has been a rough stretch for the Raiders lately, with tackles Denzelle Good and Gerald McCoy suffering season-ending injuries in the Week 1 win against Baltimore. Starting guard Good tore his ACL during Las Vegas’ opening drive against the Ravens while defensive tackle McCoy injured his left knee in the fourth quarter and was carted off the field.

The Raiders got some good news, though, on the injury front with edge rusher Yannick Ngakoue expected to play this coming Sunday against the Steelers.

A Quick Look at Smart Home Technology and Its Advantages