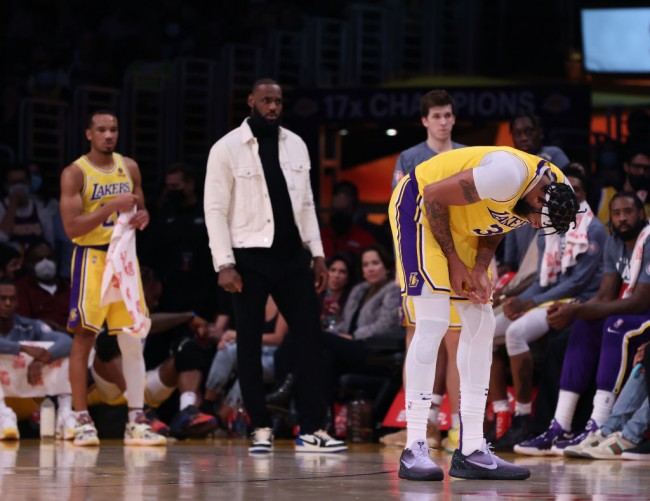 LOS ANGELES, CALIFORNIA – Anthony Davis (#3) of the Los Angeles Lakers reacts after an injury in front of LeBron James during the first half against the Oklahoma City Thunder at Staples Center on November 04, 2021 in Los Angeles, California. (Photo : Harry How/Getty Images)

The injury bug has struck Los Angeles Lakers superstar LeBron James once again, with the four-time NBA champion set to miss at least one week because of an abdominal strain. The Lakers already felt his absence on Thursday night as they suffered a gut-wrenching 107-104 loss to the Oklahoma City Thunder.

James struggling with injuries to start the season

It has been a rough start to the season for James, who has already missed two of the Lakers’ first eight games this season because of a right ankle injury. The 19-year veteran aggravated his ab injury that the Lakers call a rectus abdominis strain during Tuesday’s 119-117 victory over the Houston Rockets.

The Lakers are cautious with their franchise player’s new injury, with the medical staff taking their time with James’ recovery. According to head coach Frank Vogel, James first started feeling the injury during the fourth quarter of the game against the Rockets.

Vogel said James felt something pulling when he came over to the bench and the Lakers’ medical staff “discovered there was something there after the game.” Vogel made it clear to reporters that James’ injury is not related to the groin tear he suffered during the 2018-19 season that forced him to miss 27 games.

Age might finally be catching up with James, who is shooting just 46.7% from the field this season, his lowest percentage since his rookie year in 2003. James is still putting up solid numbers, though, recording averages of 24.8 points, 7 assists, and 5.5 rebounds.

The Lakers sorely missed James’ production in their latest loss to Oklahoma City as they squandered a huge lead against the Thunder for the second time this season. What makes this defeat such a bitter pill to swallow for Lakers fans is that the Thunder’s only two wins this season have come against the Lake Show.

The Lakers built a 19-point lead in the first half but choked once again in the fourth quarter, with Oklahoma City taking its first lead of the night during a 12-0 run. Carmelo Anthony kept the Lakers afloat with a barrage of threes in the final quarter, but they were unable to pull off the win in the end with Russell Westbrook missing his game-tying triple at the buzzer.

To make matters worse for the Lakers, Anthony Davis sprained his right thumb before halftime. He was able to finish the game, though, but that injury is another source of concern for the Lakers this season.

They can ill afford to lose Davis with James already sidelined. The Lakers will be tested in their upcoming games as they will square off with the Portland Trail Blazers, Charlotte Hornets, Miami Heat, and the Minnesota Timberwolves.