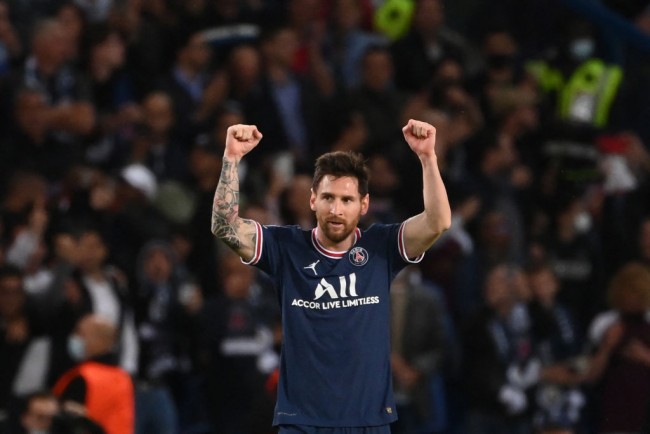 Lionel Messi finally opened his goal-scoring account for Paris Saint-Germain, and it couldn’t have come at a more opportune time. The Argentina captain scored in the 74th minute to help seal a 2-0 win over Manchester City in the Champions League on Tuesday. It was a critical win for the Parisian giants, who leapfrogged City for the top spot in Group A.

Messi’s strike against City was a historic one as it was the first club goal that he scored that was not for FC Barcelona. That goal ended a run of 264 minutes without scoring for Messi since his blockbuster move from Spain this past summer.

The 34-year-old star forward had failed to score in his first three matches for PSG, firing blanks against Reims, Club Bruges, and Lyon after joining them on a free transfer. That all changed in the match against Manchester City, with Messi scoring with his only shot of the game.

Another view of Messi’s goal against Man City. pic.twitter.com/OgSPS0cRRF

Messi’s goal was a thing of beauty, with the Argentine creating a bit of magic with the help of French teammate Kylian Mbappe. Messi launched his patented mazing run from the halfway line before playing a one-two with Mbappe just outside the box. Messi made sure Mbappe’s return pass didn’t go to waste as he left City goalkeeper Ederson rooted to the spot with a fantastic shot into the top corner.

Mbappe, Messi, and Neymar showed signs that they are starting to understand the attacking tendencies of each other. The much-hyped trio played 44 passes between each other in the win against City, almost 10 percent of their team’s total in that contest.

Messi has made it a mission to torment his former manager Pep Guardiola in Europe’s biggest football club competition. Messi’s goal on Tuesday was his seventh in five Champions League outings against his former Barcelona boss. No other player has scored more often against the current Manchester City manager in this tournament.

This season, Liverpool maintained their perfect record in the Champions League group stage with an emphatic 5-1 victory over FC Porto in Portugal. Mo Salah and Roberto Firmino each scored twice, and Sadio Mane added another for the Reds, who gave a fitting tribute to club legend Roger Hunt, who passed away Monday evening at the age of 83.

The most shocking result of the night came in Spain at the Bernabeu with Real Madrid losing to Moldovan minnows Sheriff Tiraspol, 2-1. Sebastian Thill stunned the hosts with one of the goals of the competition thus far in the 89th minute, firing a rocket from outside the box into the top corner to send Sheriff top of the group with two wins from two matches.