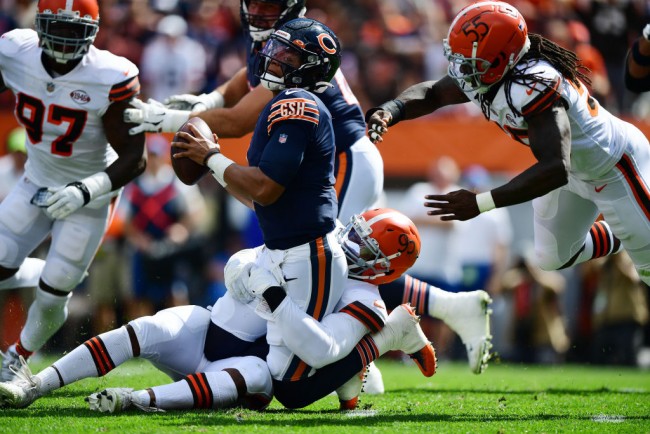 CLEVELAND, OHIO – Justin Fields (#1) of the Chicago Bears is sacked during the second quarter in the game against the Cleveland Browns at the FirstEnergy Stadium on September 26, 2021 in Cleveland, Ohio. (Photo : Emilee Chinn/Getty Images)

The Cleveland Browns made sure Justin Fields had a horrible time in his first start with the Chicago Bears, sacking the rookie quarterback nine times on Sunday afternoon. Fields will look to make amends this coming Sunday against the Detroit Lions, who are coming off a painful loss to the Baltimore Ravens. Here’s our preview of this Lions vs Bears game to see who has the edge in this battle of struggling teams.

The search goes on for Dan Campbell’s first win as Detroit head coach after the Lions suffered a gut-wrenching 19-17 loss to the Baltimore Ravens on Sunday. Justin Tucker set a new NFL record by blasting a 66-yard field goal attempt as time expired to hand the Lions their third defeat of the season.

The Lions looked to be on their way to a famous victory after scoring 10 unanswered points in the fourth quarter to turn a 16-7 deficit into a 17-16 lead. However, Tucker made sure the Lions fans in attendance wouldn’t go home happy, as his attempt bounced through off the crossbar for an incredible make.

There was some controversy with the Ravens win, though, as it appeared the play clock had already expired before Tucker attempted the record-breaking kick. Replays showed the play clock expiring before Lamar Jackson’s incomplete pass to the sideline.

That missed call denied Jared Goff a maiden win for his new team. The Lions quarterback completed 22 of 30 passes for 217 yards in Week 3. He got some support from D’Andre Swift, who racked up 107 total yards and a score for the Lions.

Justin Fields‘ first career start for Chicago didn’t go according to plan as the Bears suffered an embarrassing 26-6 beatdown at the hands of the Cleveland Browns on Sunday. It was a humiliating defeat for the Bears, who were held to just six first downs the entire contest.

The Browns had a field day against Fields, sacking the rookie quarterback nine times on Sunday. Myles Garrett was Fields’ chief tormentor in Week 3, racking up 4 ½ sacks to set a new franchise record for Cleveland. The Bears’ offensive line offered little protection to Fields, who was hit by the Browns 15 times.

He only has 5 completions… 😬
pic.twitter.com/KVJLBcclPA

Fields completed just 6 of 20 passes for 68 yards as the Bears managed just one net yard passing against the Browns. Such was Cleveland’s dominance in this game that the Browns outgained the Bears, 418-47.

Fields wasn’t pleased with the beating he took, saying, “The way I feel right now, I don’t like feeling like this.” Fields later added that he would do anything not to let a game like this happen again. X-rays were taken on Fields’ throwing hand after the game, which was not a complete surprise given his body’s punishment from the Browns defenders.

According to NFL Network’s Ian Rapaport, Fields said his hand is fine, so he is still expected to start for the Bears in their game against the Lions in Week 4.

Detroit wins on the road to record its first win of the season.