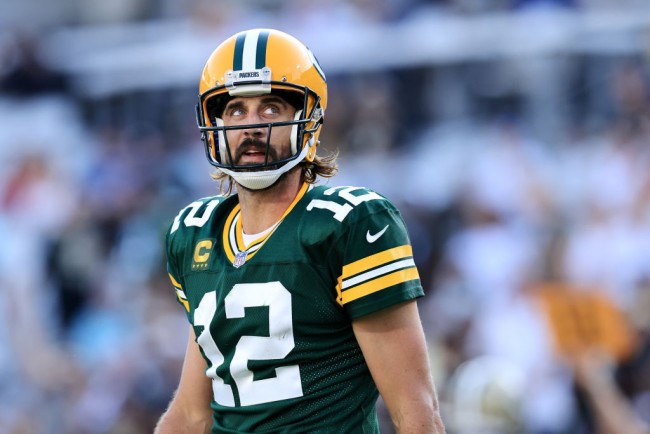 JACKSONVILLE, FLORIDA – Aaron Rodgers of the Green Bay Packers reacts against the New Orleans Saints during the second half at the TIAA Bank Field on September 12, 2021 in Jacksonville, Florida. (Photo : Sam Greenwood/Getty Images)

On Sunday afternoon, the Green Bay Packers and Detroit Lions suffered disappointing defeats, with both teams crashing to 0-1 slates to start the 2021 NFL season. The two NFC North rivals will look to get their respective campaigns back in order when they lock horns in a critical Week 2 clash at Lambeau Field this coming Monday.

Packers head into this match as -10.5 favorites

The Green Bay Packers’ 2021 NFL campaign is off to a horrible start after they absorbed an embarrassing 38-3 loss to the New Orleans Saints on Sunday. The Packers had no answer for new Saints quarterback Jameis Winston, who threw for 148 yards and five touchdowns. It was a disappointing performance by the Packers, who never led the entire game.

They will look to get their season back on track when they host the Detroit Lions this coming Monday. For the Packers to record the much-needed win, they will need to sort out their offense fast. The Packers recorded just 229 total yards in their loss to the Saints.

The most atrocious performance of Aaron Rodgers’ career! pic.twitter.com/4fRUeauhlh

The onus then is on quarterback Aaron Rodgers to step up his game against the Lions. On Sunday, he struggled mightily, completing just 15 of 28 passes for 133 yards with no touchdowns and a pair of interceptions. Rodgers’ performance was so bad that he was benched with nearly 11 minutes remaining in the contest.

It wasn’t just Rodgers and the passing game that had a rough time on Sunday as Green Bay’s ground attack also stalled against New Orleans’ punishing defense. Running back, Aaron Jones, who signed a lucrative deal this past offseason to remain with the Packers, was held to just nine yards on five carries.

Detroit may have suffered an eight-point loss to San Francisco last Sunday, but there were still plenty of positives for the Lions to take heading into their clash with Green Bay this coming Monday. Even though they lost 41-33 to the 49ers in Week 1, the Lions will take comfort in the fact that that they gave their favored opponents fits during the latter stages of the second half.

Starring for Detroit in that fourth-quarter surge was Jared Goff. The game looked to be over with just 5:45 remaining as the Lions got the ball back on their 14-yard line while trailing 41-17. Goff refused to surrender, however, in his first outing for the Lions, completing 16 of his next 20 passes to spark a remarkable comeback.

Goff first engineered an 86-yard drive to make it 41-25. After the Lions recovered a successful onside kick, Goff led a 59-yard touchdown drive to make it 41-33 with 1:10 remaining. Goff managed to complete passes for two-point conversions after each of those touchdowns.

The comeback was still on after the Lions forced a fumble at their 30-yard line to get the ball back with 52 seconds left. Goff led Detroit to a first down at San Francisco’s 25-yard line, but the drive, unfortunately, stalled there with the former Rams QB throwing three incompletions alongside a one-yard run.

That late offensive spark gave Lions fans optimism that this season may not be a lost cause after all. Goff, who finished with 338 yards and three touchdowns, will be looking to torch a Green Bay secondary that surrendered five passing touchdowns on Sunday.

Green Bay bounces back and covers the -10.5 spread easily.

Top 5 Cybersecurity Bootcamps for You 2021