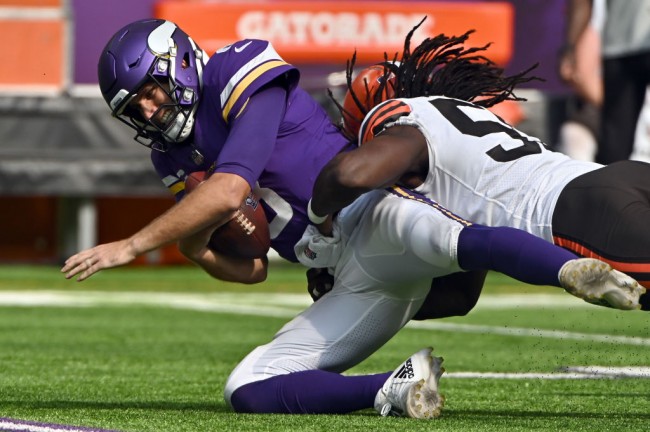 MINNEAPOLIS, MINNESOTA – Kirk Cousins (#8) of the Minnesota Vikings is tackled by Takkarist McKinley (#55) of the Cleveland Browns at the U.S. Bank Stadium on October 03, 2021 in Minneapolis, Minnesota. (Photo : Stephen Maturen/Getty Images)

Two struggling NFC North teams will be squaring off this coming Sunday in Week 5 as the Detroit Lions visit the Minnesota Vikings in a pivotal showdown at the U.S. Bank Stadium. Who will prevail in this divisional clash? Here’s our preview of the Lions vs Vikings game to find out which team has the edge.

The search continues for Dan Campbell’s first victory as Lions head coach after Detroit suffered a 24-14 loss to the Chicago Bears on Sunday. The Lions had their chances in this game, but their red zone futility cost them dearly.

Detroit failed to score on four different drives that reached the red zone, setting a new franchise mark for a single game. That mark also ties for the most by any NFL team in a game since 2000. The Lions’ inability to take advantage of their red zone opportunities helped the Bears, who jumped to a 14-0 lead and never trailed the entire contest.

Bizarre turnover for the Lions

To make matters worse for the Lions, they also lost two of their key players in that game to injuries. Romeo Okwara, their top pass-rusher, suffered a torn Achilles injury during the first quarter of the Bears game and will now miss the remainder of the season. He’s a vital cog of the Lions’ defense, registering six total tackles with a sack and stuff this campaign. Okwara led the Lions in sacks last season with 10.

Center Frank Ragnow will also miss considerable time after suffering a turf toe injury in the loss to the Bears. Ragnow and Okwara are just the latest Lions players to be struck by the injury bug. Former No. 3 draft pick Jeff Okudah also had an Achilles tear during the season’s opening week.

On Sunday, the Minnesota Vikings were sent crashing back to earth with a deflating 14-7 loss to the Cleveland Browns. The Vikings’ high-flying offense sputtered against the Browns, as they fell two games below .500 again with a 1-3 record.

For the Vikings to return to the win column against the Lions, they will need to do a much better job on their third-down opportunities. They converted just five of their 16 third-down attempts against Cleveland in Week 4. The onus then is on Kirk Cousins to improve on his passing accuracy.

Kirk Cousins completely missed a wide open touchdown to K.J. Osborn here. There is no reason he can’t make this throw.

It’s not his fault the Vikings lost but he didn’t do anything to help them win. pic.twitter.com/MzekQNIl3B

He had his worst outing of the season in the loss to the Browns, completing just 20 of 38 passes for 203 yards with one touchdown and one interception. Cousins was sacked twice in that game as he threw his first pick of the 2021 campaign.

It’s crucial for the Vikings that they get their ground game going as well against Detroit. Dalvin Cook, Alexander Mattison, and C.J. Ham struggled against the Browns’ defensive line, combining for just 55 yards on 20 carries.