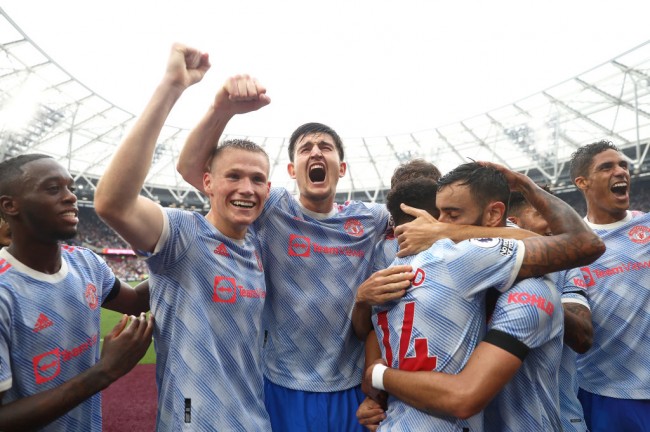 Chelsea, Liverpool, and Manchester United continued their winning ways on Matchday 5 to remain on top of the Premier League table. Chelsea and Liverpool recorded emphatic three-goal wins over Tottenham and Crystal Palace, respectively, while Manchester United escaped London Stadium with a dramatic victory over West Ham.

Liverpool was the first team to reach 13 points in the Premier League this season after defeating Crystal Palace, 3-0, on Saturday. Sadio Mane starred for the Reds in this victory, scoring the opener in the 43rd minute, which was his 100th goal in all competitions for Liverpool.

Mohamed Salah doubled Liverpool’s lead in the 78th minute before Naby Keita made it 3-0 with a delightful curling strike. It was another resounding victory for the Reds, who have now won each of their last nine Premier League meetings with Crystal Palace.

Manchester United grabbed a share of the lead with Liverpool after a dramatic 2-1 win over West Ham United at the London Stadium on Sunday. It was a huge victory for the Red Devils, who extended their unbeaten run on the road in the Premier League to a record 29 matches.

West Ham scored the opener with Said Benrahma giving the home side a shock 1-0 lead in the 30th minute after his shot took a huge deflection off defender Raphael Varane. Cristiano Ronaldo restored parity, however, just five minutes later, converting from close range to score his fourth goal for the club since his return.

Jesse Lingard, who enjoyed a successful loan spell with West Ham last season, broke his former supporters’ hearts in the 88th minute, curling in a marvelous effort into the top corner to give United a 2-1 lead. More drama ensued in second-half injury time as West Ham was awarded a penalty after Luke Shaw was adjudged to have handled the ball inside the box.

Mark Noble came off the substitutes’ bench to take the penalty but David Moyes’ decision backfired as David de Gea saved his spot kick. It was De Gea’s first penalty save in the Premier League since 2014, which happened on his 22nd attempt.

On Sunday, Chelsea displayed their title credentials, producing a second half masterclass against Tottenham in a one-sided 3-0 win. Thiago Silva opened the scoring for the Blues four minutes after the restart, heading past Spurs keeper Hugo Lloris from a Marcos Alonso corner.

N’Golo Kante then doubled Chelsea’s advantage in the 57th minute after his long-range strike took a wicked deflection off Eric Dier. Antonio Rudiger sealed the win in the injury time of the second half with his shot attempt finding the bottom corner.

It was another huge win for the Blues, who have now won each of their last three away matches against Tottenham. Manager Thomas Tuchel made a tactical masterstroke during half-time, replacing the ineffective Mason Mount with Kante. That move paid immediate dividends as the Blues recorded 10 shots on target in the second half alone, the most in the Premier League this season.