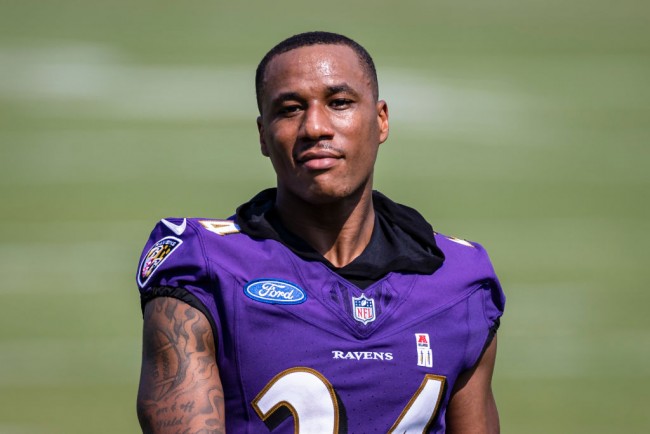 The injury bug is not done with Baltimore. According to ESPN‘s Adam Schefter, the Ravens’ bad luck regarding injuries continued on Thursday when running back Gus Edwards and cornerback Marcus Peters both suffered season-ending torn ACLs in practice.

Edwards is the latest running back to suffer a season-ending injury for the Ravens in just 12 days. The injury curse first struck on August 28 when projected lead back J.K. Dobbins tore the ACL in his left knee in the Ravens’ preseason finale against the Washington Football Team.

Days later, on September 2, it was Justice Hill’s turn to get hurt, with the 23-year-old running back suffering a torn Achilles tendon. With Dobbins, Hill, and now Edwards out for the season, Baltimore’s lead back duties will fall to Ty’Son Williams. His ascent to RB1 status is simply astounding given that Williams was only a practice player a year ago, and he still doesn’t have an NFL carry in his career.

Harbaugh praised Williams’ development last week, saying, “He jumped out right away last year in practices. He just got better and better.” Harbaugh said Williams worked hard to be where he is now, and the long-time Ravens coach thinks he will do well.

That being said, it will still be a tall order to ask Williams to replicate the production that Dobbins and Edwards gave the Ravens’ backfield last season. Dobbins and Edwards combined for 1,528 rushing yards in the previous campaign, accounting for 81 percent of the output by Ravens running backs.

The Ravens led the league in rushing the past two seasons, with Baltimore employing an offense that is heavily driven by its ground game. It will be interesting to see whether the Ravens will divert from those plans and incorporate more aerial attacks this coming season.

If Baltimore wants to persist with its ground attacks, the Ravens will need Le’Veon Bell to step up his game. The veteran running back was signed by the Ravens just last week to help cover for Dobbins’ absence, but he figures to get more touches now with Edwards out as well. Bell, who has 6,453 career rushing yards, just started practicing with Baltimore last Wednesday.

Another huge blow for the Ravens was the injury to Peters. He is an integral part of Baltimore’s defense because of his playmaking ability, with Peters leading the league in interceptions with 31 since he entered the NFL in 2015.

Since Baltimore acquired Peters in Week 9 of 2019, the Ravens’ secondary improved a lot, allowing the fewest yards per pass attempt (6.1) in the league and tied for the second-fewest touchdown passes surrendered (31).