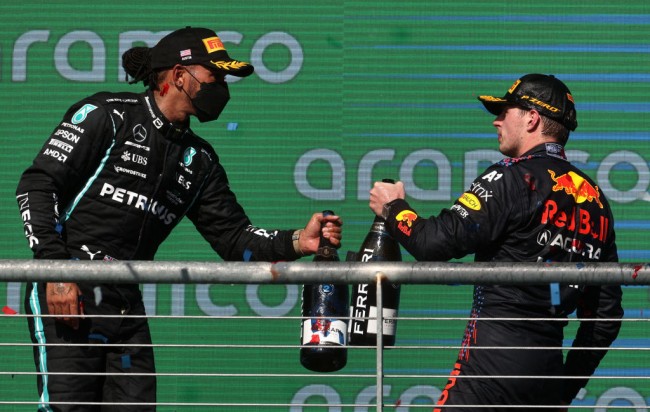 AUSTIN, TEXAS – Race winner Max Verstappen of Netherlands and Red Bull Racing and second placed Lewis Hamilton of Great Britain and Mercedes GP celebrate on the podium during the F1 Grand Prix of USA at Circuit of The Americas on October 24, 2021 in Austin, Texas. (Photo : Chris Graythen/Getty Images)

Max Verstappen moved ever closer to capturing his first Formula One Drivers Championship after winning a fantastic duel with main rival Lewis Hamilton in the 2021 United States Grand Prix. Verstappen finished 1.333 seconds ahead of Hamilton to seal his first-ever win at the Circuit of the Americas and extend his lead over the seven-time world champion to 12 points with just five races remaining.

Hamilton got the advantage in the early going, producing a superb start off the line from second on the grid. Verstappen tried to squeeze him as far as possible down the inside as they headed into Turn 1, but that was not enough to stop Hamilton from gaining a position in the opening lap.

However, Hamilton was not able to pull away from Verstappen, with both drivers separated by less than a second in the first 10 laps. Verstappen decided to shake things up on Lap 11, opening the pit window by changing from medium to hard tires. That decision proved to be a masterstroke as Hamilton emerged from his pit stop on Lap 14 in second place behind the under-cutting Verstappen.

Red Bull decided to roll the dice again on Lap 29, instructing Verstappen to come in for another pit stop for another set of hard tires. Mercedes chose to let Hamilton stay out longer, with the Briton holding a 16-second lead over Verstappen once the Dutchman emerged from his second pit stop.

Red Bull gamble pays off as Verstappen holds off Hamilton

Mercedes sensed an opportunity to regain the championship lead from Verstappen, with Team Principal Toto Wolff telling Hamilton that they are racing for the win. Hamilton replied, “Leave me to it, bro!” as he entered the pit lane on Lap 37 with a precarious 11.5 second lead over Verstappen. He emerged from his second pit stop down by 11.5 seconds to Verstappen.

The chase was on for Hamilton as he looked to overhaul Verstappen’s six-point lead in the title race with a win in Austin. Hamilton slowly ate away at Verstappen’s advantage, with the Briton slicing the deficit to just 1.7 seconds with five laps remaining.

The Dutchman would not be denied, though, as he found just enough pace from his hard compounds to keep Hamilton at bay. Much to Hamilton and Mercedes’ frustrations, he was not able to utilize the DRS as Verstappen managed to keep his advantage above one second until the final lap.

It was a highly successful afternoon for Red Bull Racing as Sergio Perez also nabbed a podium finish with a third-place showing. Red Bull has now trimmed Mercedes’ lead in the Constructor Standings to 23 points due to Verstappen’s win and Perez’s P3 finish.