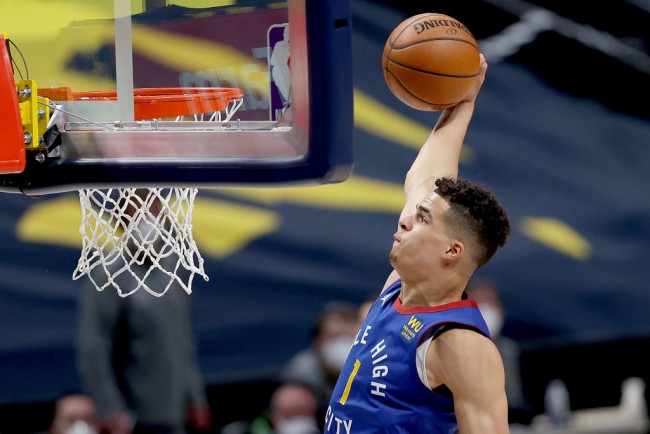 DENVER, COLORADO – Michael Porter Jr. of the Denver Nuggets dunks against the Brooklyn Nets in the second quarter at the Ball Arena on May 08, 2021 in Denver, Colorado. (Photo : Matthew Stockman/Getty Images)

Michael Porter Jr. has just secured the bag. The star forward and the Denver Nuggets have agreed on a massive five-year designated maximum extension that could be worth up to a staggering $207 million.

Porter will hit that amount if he secures a spot in one of the three All-NBA teams this season. If Porter fails to land that recognition, he will settle for the five-year rookie max extension worth $172 million.

The deal with Porter means that the Nuggets have signed their top four players to long-term contracts. Denver signed the league’s reigning Most Valuable Player Nikola Jokic and Jamal Murray to five-year deals in 2018 and 2019, respectively. They then made a huge commitment to Aaron Gordon just weeks ago, signing him to a four-year, $92 million contract extension.

With Porter locked down as well, the Nuggets are going all-in with this fearsome foursome, hoping that this core can give Denver its first-ever NBA championship. Porter showed his worth last season, averaging 19 points for the Nuggets while shooting an incredible 54.2 percent from the floor. The 6-foot-10 forward was lights out from beyond the arc during the last campaign, knocking down 44.5 percent of his 3-point attempts.

Porter’s length and outside shooting are key weapons in today’s NBA, and the Nuggets recognized that, handing him one of the biggest contracts in their franchise’s history. He is expected to play a vital role for the Nuggets this coming season, with Murray still recovering from the torn ACL he suffered against the Golden State Warriors last March.

Porter’s success story has been remarkable, given the rocky start he endured in the early stages of his NBA career. He was one of the top prospects in the nation before his enrollment in 2017 at the University of Missouri.

A back injury derailed his collegiate career, forcing him to miss all but three games of his lone season with Mizzou. That same injury caused his stock to drop in the 2018 NBA Draft, with the Nuggets selecting him with the 14th overall pick. Injury problems hounded Porter as he missed the entire 2018-19 season due to another back surgery.

Porter managed to put those injury concerns to bed the following season, playing an important role during the Nuggets’ run to the Western Conference Finals in the Orlando bubble. He moved to the starting lineup in the 2020-21 season, providing huge offensive numbers that earned him the monster contract he signed on Monday.

All You Need to Know About Machine Learning Engineers