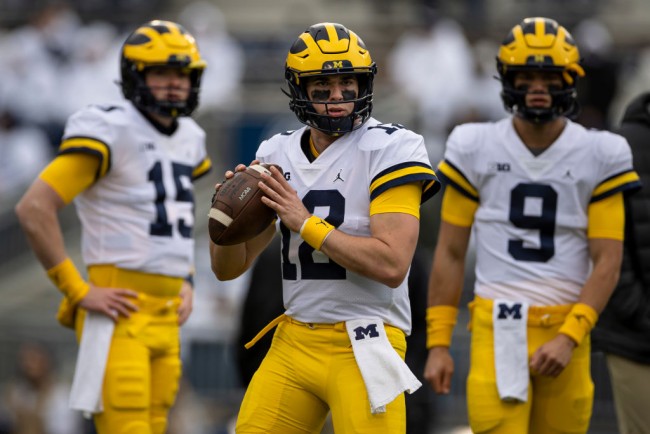 The Michigan Wolverines improved their season record to 9-1 after a narrow four-point win over the Penn State Nittany Lions in Week 11. The Wolverines will look to keep the momentum going against the Maryland Terrapins, a team they have dominated lately. Who will prevail in this Michigan vs Maryland clash? Here’s a breakdown of this key Big Ten matchup.

Cade McNamara starred for Michigan in the Week 11 win, completing 19 of 29 passes for 217 yards with three touchdowns and no interceptions. He made the play of the game with 3:29 remaining, connecting with tight end Erick All for the game-winning 47-yard touchdown pass.

And here it is. Michigan regains the lead in just over 2 minutes.

Erick All across the middle for a 50 yard sprint on a bad ankle to put Michigan up 21-17. pic.twitter.com/KIGCJlRCCa

One guy who needs to step up for Michigan in the game against Maryland is Hassan Haskins. He accounted for 201 total yards in the win over the Nittany Lions after rushing for a career-high 168 yards in Week 10 against the Indiana Hoosiers. He was Michigan’s starting running back again with Blake Corum still sidelined with an undisclosed injury. Haskins is expected to be the Wolverines’ starter in Week 12 against Maryland.

Maryland’s losing woes show no sign of ending as the Terrapins crashed to their second consecutive defeat with an embarrassing 40-21 loss to Michigan State on Saturday. Maryland had no answer for Kenneth Walker III, who ran for 143 yards and a couple of touchdowns. It was another disappointing performance by the Terrapins, who have now lost five of their last six games.

It won’t get any easier for them in Week 12 as they will next face a Michigan team that has lost just once this season. The Terps have also struggled against the Wolverines lately, losing each of their last five meetings.

FULL INTERVIEW: Jim Harbaugh says it’s still too early to look at College Football Playoff rankings, and while Ohio State is always on the mind – Maryland is up first for Michigan.

Oh, and he talked about pants catching fire from a space-heater on the sideline at Penn State. pic.twitter.com/zzhH9ITuO8

It is critical for the Terrapins that they get a quality performance from quarterback Taulia Tagovailoa. He completed 29 of 48 passes for 350 yards with two touchdowns and one interception in the loss to Michigan State.

Tagovailoa will have his work cut out for him, however, against a Michigan team that possess two of the best pass rushers in the game today. Aidan Hutchinson and David Ojabo are the first teammates in Michigan history with at least 10 sacks apiece in the same season.

Rakim Jarrett is expected to be Tagovailoa’s main target in Week 12. Jarrett has seven touchdown catches in his first 14 games with the Terps.