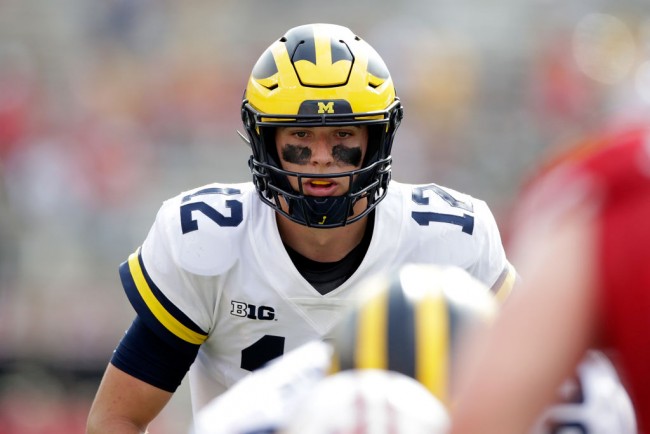 MADISON, WISCONSIN – Cade McNamara of the Michigan Wolverines looks for the snap on the 5 yard line in the fourth quarter against the Wisconsin Badgers at the Camp Randall Stadium on October 02, 2021 in Madison, Wisconsin. (Photo : John Fisher/Getty Images)

The Michigan Wolverines are off to their best start in five years after crushing the Wisconsin Badgers in Week 5. They will look to keep the hot start going this Saturday when they face the Nebraska Cornhuskers in another key Big Ten matchup. Read our preview for an in-depth breakdown of this Michigan vs Nebraska clash.

Momentum is with Michigan heading into Saturday’s showdown with Nebraska after destroying the Wisconsin Badgers, 38-17, in Week 5. It was a resounding victory by the Wolverines, who improved their season record to 5-0. They have won their first five outings by an average of 27 points.

The key to Michigan’s sizzling start had been its outstanding defense. In this campaign, the Wolverines allowed an average of just 12.8 points per game, the sixth-fewest in the entire FBS. They limited Wisconsin to just 43 yards rushing on 32 carries, helping Michigan snap its five-game losing streak in Madison. The Wolverines had previously allowed the Badgers to run for at least 340 yards in each of their last two meetings.

For the Wolverines to preserve their unbeaten record against Nebraska, they will need to establish the run. Michigan ran for just 112 yards in the win against Wisconsin, with Blake Corum only recording 46 rushing yards.

It’s important for Michigan as well that Cade McNamara continues his superb play. He was excellent against the Badgers, completing 17 of 28 passes for 197 yards with a couple of touchdowns. McNamara had been solid to start the season, completing 60 percent of his passes with five touchdowns and no turnovers.

The Nebraska Cornhuskers finally snapped their two-game losing skid with an emphatic 56-7 victory over Northwestern. It was a huge bounce-back win for the Cornhuskers, who recorded their most lopsided win against the Wildcats in the Big Ten. Nebraska’s 49-point victory was its largest winning margin against a Big Ten opponent.

Adrian Martinez starred for Nebraska in the Week 5 win, rushing for a career-best three touchdowns and passing for another score. He completed 11 of 17 passes for 202 yards, including a monster 70-yarder to Samori Toure on the game’s opening play from scrimmage.

However, things will not be easy for Nebraska in Week 6 against Michigan. Head coach Scott Frost had lost all nine of his games at Nebraska when facing ranked opponents, a bad omen ahead of the showdown against No. 9 Michigan.

However, the Huskers will fancy their chances of recording an upset against the Wolverines, as they have fared extremely well at home of late. Nebraska had outscored its opponents, 136-17, in its last three home games. This season, Fordham and Northwestern scored just seven points apiece while the Buffalo Bills were held to just three points by Nebraska.

Michigan wins and covers the spread.

Penn State vs Iowa Week 6 Predictions, Picks, Odds, and NCAA Preview: Who Will Get the 6-0 Start?

Here is Everything You Need to Know About Business Intelligence Engineer

Top 10 In-Demand Programming Language that Will Rule in 2021