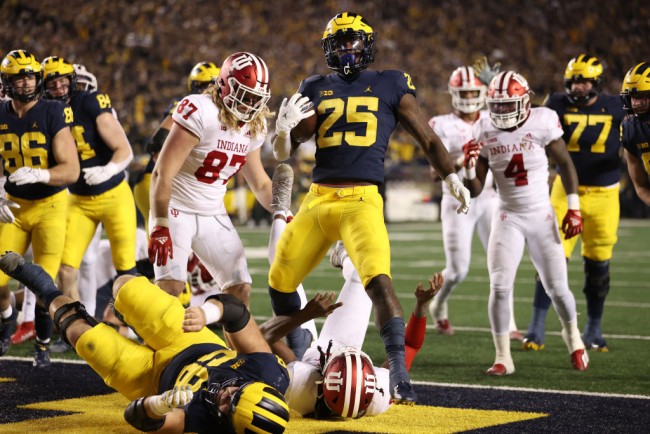 ANN ARBOR, MICHIGAN – Hassan Haskins #25 of the Michigan Wolverines scores a first half touchdown in front of Michael Ziemba #87 of the Indiana Hoosiers at Michigan Stadium on November 06, 2021 in Ann Arbor, Michigan. (Photo : Gregory Shamus/Getty Images)

The Michigan Wolverines improved their season record to 8-1 after a 22-point victory over the Indiana Hoosiers in Week 10. The Wolverines will look to keep the momentum going against Penn State, a team that they have struggled against lately. Michigan has lost its last two meetings with Penn State. Can the Wolverines snap their losing skid against the Nittany Lions in the Michigan vs Penn State clash?

Hassan Haskins starred for Michigan in the Week 10 win, rushing for a career-high 168 yards and a touchdown on 27 carries. He stepped up big time in the absence of star running back Blake Corum, who missed most of the game with an undisclosed injury.

Michigan coach Jim Harbaugh told reporters earlier this week that he did not have an update on Corum’s injury so expect Haskins to play majority of the snaps against Penn State. Haskins is closing in on a 1,000-yard season as he is just 171 yards shy of that mark.

One guy who needs to step up for Michigan against Penn State is Cade McNamara. He completed 10 of 18 passes for 168 yards with two touchdowns and no interceptions in the win against Indiana. McNamara will be tested, though, by a Penn State side that has one of the best defensive ends in the country in Arnold Ebiketie. He is ninth in the nation in terms of tackles for loss with 12 1/2.

The Penn State Nittany Lions finally snapped their three-game losing skid with a 31-14 victory over the Maryland Terrapins in Week 10. Jahan Dotson delivered a performance for the ages for the Nittany Lions, who improved to 6-3 this season and 3-3 in conference play.

Dotson punished the Maryland secondary, catching 11 passes for a school-record 242 yards and three touchdowns. The Penn State senior wide receiver is ranked second in the Big Ten in both receiving yards and receiving touchdowns, amassing 932 yards and 9 touchdowns through the Nittany Lions’ first nine games.

Dotson is Penn State’s main threat through the air with his receiving yards almost double those recorded by Parker Washington, the Nittany Lions’ second most prolific receiver. Dotson also has six more touchdown receptions than any other Penn State player this season.

Dotson will have his work cut out for him, however, against a Michigan defense that allowed just 88 passing yards in Week 10.

Top 10 Easiest Programming Languages for the Students in 2021