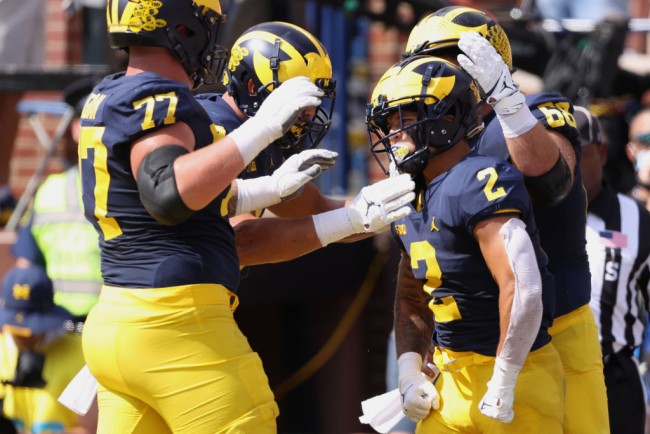 ANN ARBOR, MICHIGAN – Blake Corum (#2) of the Michigan Wolverines celebrates a first half touchdown with teammates while playing the Northern Illinois Huskies at the Michigan Stadium on September 18, 2021 in Ann Arbor, Michigan. (Photo : Gregory Shamus/Getty Images)

The Michigan Wolverines preserved their unbeaten record this season with a hard-fought seven-point victory over Rutgers on Saturday. They will look to keep that perfect slate intact when they take on the struggling Wisconsin Badgers in a blockbuster Big Ten matchup at the Camp Randall Stadium. Can Jim Harbaugh record his first win in Madison in this Michigan vs Wisconsin clash? Read our preview for a breakdown of this game.

Momentum is with the Michigan Wolverines heading into Saturday’s showdown with Wisconsin after beating the Rutgers Scarlet Knights, 20-13, in Week 4. It was a gritty victory for the Wolverines, who improved their season record to 4-0.

The key to Michigan’s hot start has been its stellar defense. The Wolverines allow an average of just 11.75 points per game this season, the fourth-fewest in the entire FBS. They held the Scarlet Knights to their lowest scoring output this year.

Things are bound to get tougher, though, for Michigan in Week 5 against Wisconsin. The Wolverines have poorly fared against the Badgers of late, losing each of their last two meetings in embarrassing fashion. Wisconsin won 35-14 at Madison in 2019 and crushed Michigan 49-11 in Ann Arbor last year. The Badgers ran for 359 yards against the Wolverines in 2019 and gained 341 yards on the ground in their showdown with Michigan last year.

For the Wolverines to preserve their unbeaten record against Wisconsin, they will need to establish their ground game this coming Saturday. Michigan is fifth in the FBS in rushing offense, averaging 290.8 yards per game on the ground this season.

Wisconsin’s College Football Playoff hopes were dealt a major blow on Saturday when it suffered a humiliating 41-13 defeat to the Notre Dame Fighting Irish at Soldier Field. The Badgers only had themselves to blame for the blowout loss, with Notre Dame scoring 31 points off Wisconsin’s five turnovers.

It was a disappointing loss for the Badgers, who have now lost each of their last seven games against Top 25 teams, including defeats to Penn State and Notre Dame this season. They will look to get their season back on track against Michigan, a team the Badgers have dominated lately in Madison.

Wisconsin has won each of its last five home games against Michigan. The last time the Wolverines won at Camp Randall Stadium was in 2001 when Michigan defeated Wisconsin, 20-17. This time around, the Wolverines will be a tougher test for Wisconsin, though, because of Blake Corum.

He leads the nation in all-purpose yards this season. Corum also has racked up 475 yards on the ground this campaign, the ninth-highest in the FBS. However, Corum will have his work cut out for him against the Badgers, who possess the nation’s top-ranked run defense. Wisconsin is allowing just 23 yards rushing per game and 1.01 yards per carry this season.

Gabriel Martinelli getting frustrated at Arsenal?