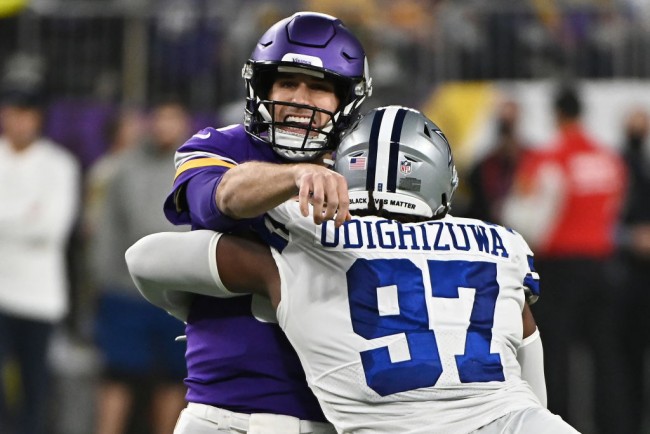 MINNEAPOLIS, MINNESOTA – Kirk Cousins (#8) of the Minnesota Vikings throws the ball as he is hit by Osa Odighizuwa (#97) of the Dallas Cowboys during the first quarter at U.S. Bank Stadium on October 31, 2021 in Minneapolis, Minnesota. (Photo : Stephen Maturen/Getty Images)

Two of the league’s best quarterbacks will lock horns in Week 9 as Lamar Jackson and Kirk Cousins square off in the Vikings vs Ravens game. Both teams are coming off heartbreaking losses so expect an intense encounter between Baltimore and Minnesota.

The Minnesota Vikings had their two-game winning streak snapped in Week 8 with a gut-wrenching 20-16 loss to the Dallas Cowboys. The Vikings failed to take advantage of Dak Prescott’s absence as they now trail the Green Bay Packers by 3.5 games in the NFC North standings.

For Minnesota to get its season back on track against Baltimore, it needs to get a better showing from Kirk Cousins. In the loss to Dallas, he looked out of sorts, throwing for just 184 yards with one touchdown and no interceptions.

Cousins will fancy his chances against Baltimore, who has struggled with its passing defense this season. Three opposing quarterbacks have thrown for at least 400 yards against the Ravens this season.

The Vikings must establish their ground game as well against the Ravens. The Vikings are just 19th in the league in the number of runs called each game, with just 40.4% of their plays going on the ground.

Many expected Dalvin Cook to put up a monster performance against Dallas after his 140-yard explosion in the Panthers game. That did not materialize as Cook ran for just 78 yards on 18 carries against the Cowboys.

Baltimore’s bye week could not have come at a much opportune time after the Ravens absorbed a shock 41-17 defeat at the hands of the Cincinnati Bengals in Week 7. The Ravens had no answer for Bengals quarterback Joe Burrow, who threw 416 yards and three touchdowns for a career-high.

The good news for the Ravens is that they regained the AFC North lead during their bye week as the Bengals suffered a stunning loss to the hapless New York Jets in Week 8. For the Ravens to preserve that advantage in Week 9, they will need to get a quality performance from Lamar Jackson.

He struggled mightily in the loss to the Bengals, completing just 15 of 31 passes for 257 yards with one touchdown and no interceptions. A growing concern for the Ravens is the number of hits their franchise quarterback is taking this season. Jackson has not only been sacked 21 times this season, but he has also absorbed 40 quarterback hits inside the pocket.

Jackson is the main reason the Ravens are on top of the AFC, throwing for 1,943 yards with 10 touchdowns and five interceptions through Baltimore’s first seven games. He continues to be a threat on the ground, leading the Ravens with 480 yards rushing and two scores.

Aspiring to become an Industrial Engineer? Here you go!