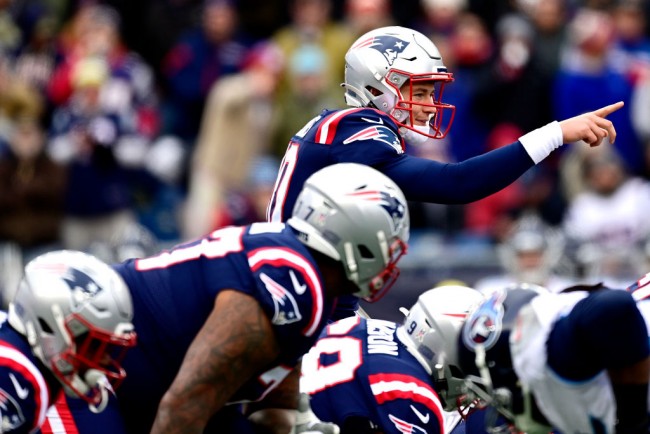 FOXBOROUGH, MASSACHUSETTS – Mac Jones #10 of the New England Patriots points out the Tennessee Titans defensive formation before the snap in the first quarter at Gillette Stadium on November 28, 2021 in Foxborough, Massachusetts. (Photo : Billie Weiss/Getty Images)

The AFC East supremacy will be at stake in Week 13 as the Buffalo Bills host the New England Patriots in a critical showdown at the Highmark Stadium. Can Mac Jones continue his scorching start in this Patriots vs Bills clash, or will Josh Allen and Buffalo protect home field in this divisional matchup?

The New England Patriots extended their winning streak to six games with a resounding 36-13 victory over the Tennessee Titans at Gillette Stadium. It was a big victory for the Patriots, who regained their half-game lead over the Buffalo Bills in the AFC East standings. The win also helped the Pats jump past the Titans for the No. 2 spot in the AFC.

For the Patriots to extend their unbeaten run against the Bills, they will need to continue their excellent play on the defensive end. They have allowed just 26 points combined in their last four games against the Titans, Atlanta Falcons, Carolina Panthers and Cleveland Browns.

They currently lead the league in scoring defence, allowing just 15.8 points per game this campaign. The Pats pressured the Titans all afternoon long, forcing Tennessee to commit four turnovers.

One guy who needs to step up for New England in this pivotal encounter is Mac Jones. He was superb in the win against the Titans, completing 23 of 32 passes for 310 yards with two touchdowns and no interceptions.

The Buffalo Bills celebrated Thanksgiving with a win, pulling off an emphatic 31-6 victory over the New Orleans Saints at Mercedes Benz Stadium. Josh Allen bounced back from his atrocious showing in Week 11, throwing for 260 yards and four touchdowns in the win against the Saints.

The victory proved to be costly, though, for the Bills as their star cornerback Tre’Davious White suffered a season-ending injury to his left knee. White tore his ACL while covering New Orleans receiver Marquez Callaway in the second quarter with his left knee bending the wrong way.

With White sidelined for the remainder of the season, the Bills will turn to Dane Jackson to be their starter for their crunch showdown against the Pats. This year, he has played in all 11 of Buffalo’s games, mostly on the Bills’ special teams. Jackson has recorded 14 total defensive tackles this season.

During training camp, Jackson competed with Levi Wallace for the cornerback position opposite White. Both of them are now tasked to contain New England’s passing attack this coming Monday.

Replacing White will be difficult, though, as he is one of the league’s best defensive backs. Opposing quarterbacks only had a 50.8% completion percentage and a 58.9 passer rating when targeting receivers defended by White this season. White’s defensive prowess is that he has not allowed a passing touchdown for the Bills this season.

Buffalo wins and covers the spread.

A game-changer in the healthcare sector