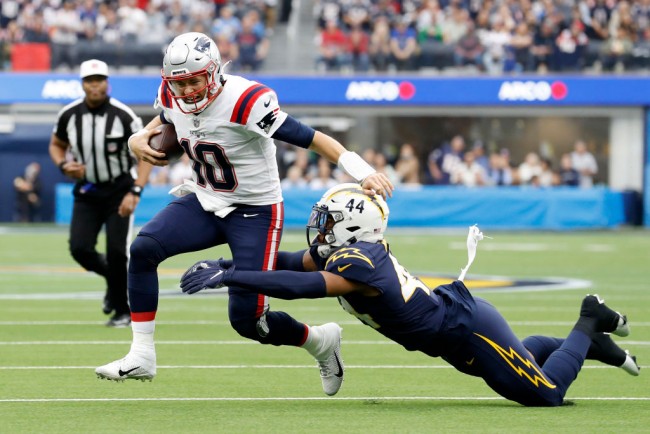 INGLEWOOD, CALIFORNIA – Mac Jones (#10) of the New England Patriots runs with the ball while being chased by Kyzir White (#44) of the Los Angeles Chargers in the second quarter at SoFi Stadium on October 31, 2021 in Inglewood, California. (Photo : Joe Scarnici/Getty Images)

The New England Patriots have flourished on the road this season, winning all three of their away games in 2021. The Patriots will look to continue that perfect start when they travel to Charlotte in Week 9 to face the Carolina Panthers. Read on for a preview of this Patriots vs Panthers clash.

The New England Patriots extended their winning streak to two games with an impressive 27-24 victory over the Los Angeles Chargers at SoFi Stadium. It was a critical victory for the Patriots, who kept pace with the sizzling Buffalo Bills in the AFC East standings, trailing them by just two games heading into Week 9.

In their biggest win of the season, Adrian Phillips starred for the Pats, recording two interceptions against his former team, including one he returned for the go-ahead touchdown with 10:40 remaining in the fourth quarter. It was the first multi-interception game of Phillips’ eight-year career.

GO ADRIAN!!@Phillips_17 pick-six for the lead!

The Patriots needed that huge performance from Phillips and the Patriots defense as Mac Jones struggled with his passing for most of the afternoon. He completed just 18 of 35 passes for 218 yards with no touchdowns and interceptions against the Chargers, a far cry from his 70.4% completion rate in New England’s previous seven games.

Jones was clutch, though, in the fourth quarter, going a perfect 4 of 4 for 43 yards on a 14-play drive that took up nearly seven minutes of game time. That resulted in a Nick Folk field goal which gave New England a double-digit advantage.

On Sunday, the Carolina Panthers finally snapped their four-game losing skid with a 19-13 victory over the Atlanta Falcons. It was an important win for the Panthers, who gained some ground on the Tampa Bay Buccaneers after their loss to New Orleans. They trail the Bucs by two games in the NFC South standings entering Week 9.

For the Panthers to make it back-to-back wins against the Patriots, they will need to continue their excellent play on the defensive end. The Panthers put the clamps on Matt Ryan and the rest of the Falcons, who managed just 213 yards of total offense in Week 8. Ryan had one of his worst games in an Atlanta uniform, recording just 146 yards passing, and was sacked three times.

Stephon Gilmore made quite an impact in his debut for Carolina, recording a key interception in the win against Atlanta. Shaq Thompson also nabbed a pick in his first game since returning from a foot injury.

It is important for the Panthers that they establish their running game against the Patriots. They ran for 203 yards against the Falcons, 82 of which came from Chuba Hubbard. Sam Darnold also did some damage on the ground, recording 66 rushing yards.

Know Everything About a Blockchain Solution Architects

10 Best Countries to Start Your Coding or Programming Careers