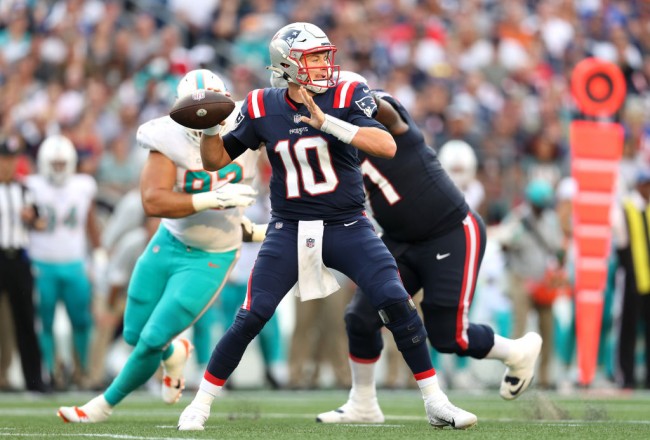 FOXBOROUGH, MASSACHUSETTS – Mac Jones (#10) of the New England Patriots looks to pass against the Miami Dolphins during the first half at the Gillette Stadium on September 12, 2021 in Foxborough, Massachusetts. (Photo : Maddie Meyer/Getty Images)

On Sunday afternoon, the New England Patriots and the New York Jets each suffered heart-breaking defeats to kick start their respective 2021 NFL campaigns. The two AFC East rivals will look to record their first win of the season when they face each other in a vital Week 2 clash at New York this coming Sunday.

The New York Jets’ 2021 NFL campaign is off to a poor start after they suffered a 19-14 loss to the Carolina Panthers on Sunday. The Jets had no answer to their former quarterback Sam Darnold, who threw for 234 yards in the first half alone, 16 more than in any opening half in his previous three seasons in the Big Apple. It was a disappointing performance by the Jets, who never led the entire match.

They will look to get their season back on track when they lock horns with the New England Patriots this coming Sunday. For the Jets to record their first win of the season, they will need to improve their play on the offensive end. The Jets recorded just 303 total yards in their loss to the Panthers.

The onus then is on rookie quarterback Zach Wilson to step up his game against the Pats. On Sunday, he struggled mightily, completing just 20 of 37 passes for 258 yards with two touchdowns and one interception as he recorded a quarterback rating of 28.9.

The Jets’ offensive line will need to do their share and protect their new franchise quarterback in the game against New England. Wilson got bullied in the loss to Carolina as he was sacked by the Panthers’ defense six times.

It’s paramount for the Jets to get their ground game going against the Pats to take some pressure off Wilson. In Sunday’s defeat to Carolina, the Jets mustered just 45 rushing yards with no touchdowns on the ground.

Mac Jones lived up to the hype in his first official game as New England’s quarterback, but his performance still wasn’t enough as the Patriots suffered a gut-wrenching 17-16 defeat to the Miami Dolphins on Sunday.

In his debut for the Patriots, Jones dazzled, completing 29 of 39 passes for 281 yards and one touchdown with no interceptions. In his first career start, the 281 passing yards that Jones threw were the most by a Pats QB.

He was poised to record his first game-winning drive in a New England uniform, but Miami cornerback Xavien Howard spoiled the party, stripping the ball away from Pats running back Damien Harris at the 9-yard line with just more than three minutes remaining in the game and recovering the fumble as well.

The Patriots will look to get back on track in Week 2 against a Jets defense that surrendered 390 total yards in their season-opening loss to Carolina. It will be interesting to see how Jones will fare against Wilson in an early battle between two of the league’s top rookie quarterbacks.

New England not only wins but also covers the -4 point spread against the Gang Green.

How CIOs Can Get the Most ROI From Digital Transformation Budgets

The Apple rumors were wrong