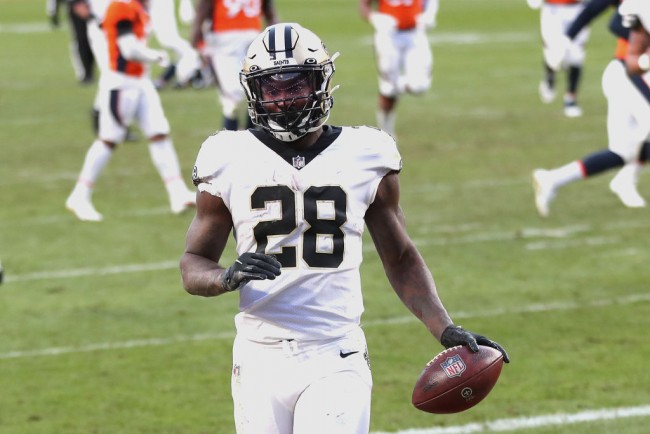 DENVER, COLORADO – Latavius Murray of the New Orleans Saints rushes for a 36 yard touchdown during the third quarter of a game against the Denver Broncos at Empower Field At Mile High on November 29, 2020 in Denver, Colorado. (Photo : Matthew Stockman/Getty Images)

The New Orleans Saints have parted ways with veteran running back Latavius Murray. The Saints opted to release Murray after refusing the team’s request to take a salary reduction ahead of the 2021 NFL season.

Murray had two years remaining on the four-year, $14.4 million contract he signed back in 2019. He proved to be a worthwhile signing for the Saints, racking up 1,293 rushing yards, 411 receiving yards, and 11 total touchdowns while serving as the primary backup for star running back Alvin Kamara the past two seasons.

Murray showed his value to the Saints in 2019 when Kamara missed a couple of games because of injuries, tallying at least 150 yards from scrimmage with two touchdowns as an every-down back in each of those outings.

Murray, who was set to earn $3.15 million in salary and bonuses this season, had a cap number of $4.176 million this year and $4.3 million in 2022. That was a steep price for the cash-strapped Saints, who had to trim more than $110 million earlier this offseason to fit under the league’s reduced salary-cap number for the 2021 campaign.

With Murray’s departure, New Orleans will save $2.327 million in salary cap space for the 2021 season. That is a critical move by the front office, given that the Saints were just $2.1 million under the salary cap entering the new season.

Also aiding the Saints’ decision in releasing Murray was the sudden emergence of Tony Jones Jr. during training camp and preseason. This preseason, Jones has been a revelation for New Orleans after appearing in just one game for the Saints’ last campaign.

Jones, an undrafted rookie out of Notre Dame, led the Saints with 106 rushing yards and a touchdown in two preseason games. Jones also caught six passes for 42 yards, showing he can also be a threat through the air. He is now listed as the Saints’ No. 2 running back on their depth chart and will be Kamara’s backup in their season opener against the Green Bay Packers this coming Sunday.

Murray now finds himself without a team with the NFL season set to start in just a couple of days. Expect teams to line up for Murray’s services, though, as the 31-year-old running back still has plenty left in the tank.

Murray rushed for 656 yards last season, averaging 4.5 yards per carry. He also caught 23 passes for 176 yards and a touchdown. The 2015 Pro Bowler has had a stellar NFL career, rushing for 4,991 yards and 43 scores while catching 185 passes for 1,294 yards and a pair of touchdowns in seven seasons played.