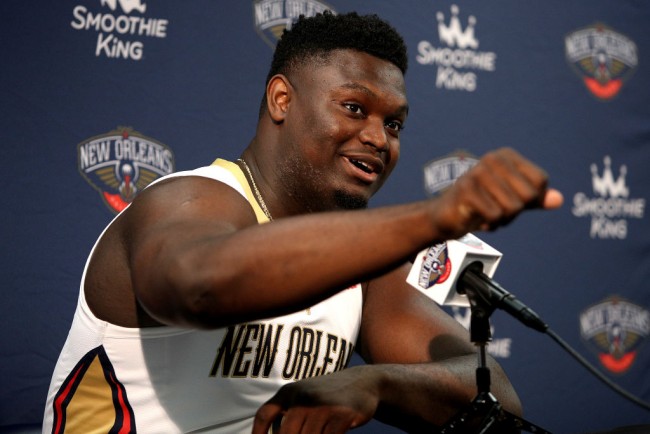 The New Orleans Pelicans’ preparations for the upcoming 2021-22 NBA season took a massive hit on Thursday. The news is that star forward Zion Williamson will miss the start of the new campaign because of a right foot injury that required surgery during the offseason.

Doctors encouraged by the healing of Williamson’s bone

The good news for New Orleans fans is that Williamson is on his way to a full recovery with Pelicans team doctor Dr. Scott Montgomery and Dr. Richard Ferkel encouraged by the healing of his bone based on the scans they reviewed. Griffin said that doctors had cleared Williamson to do the next step, which is progressions in his running and on-court work.

Griffin addressed questions regarding the date of Zion’s return, saying, “It’s everyone’s goal that Zion return to play as soon as safely possible. Obviously, two to 2½ weeks from now means he will not be on the floor for the first week of games. When he is able to return safely, we will do that.”

Many were surprised during the Pelicans’ media day on September 27 when Griffin announced Williamson’s foot injury that he suffered before the summer league. Griffin and Williamson were confident back then that the franchise player would be back in action in time for the season opener.

Griffin said back then that Williamson’s timeline should get him back on the court in time for the regular season, while Zion himself told reporters that he expects to be back for the first official game. The latest delay will send alarm bells ringing for Pelicans fans, who have seen their star player battle various injuries in his very young NBA career in New Orleans.

The No. 1 overall pick in the 2019 NBA draft played in only 24 games for the Pelicans during his rookie season after suffering a torn meniscus in his right knee during their training camp in October that same year. Williamson then fractured his left index finger last season, ending his promising NBA campaign six games early.

Williamson was a beast for New Orleans that season, averaging 27 points, 7.2 rebounds, and 3.7 assists in 33.2 minutes per outing. He played 61 games for the Pels in the 2020-21 season and earned his first-ever All-Star nod. The finger injury affected the Pelicans’ playoff push, though, as they missed the play-in tournament by just two games.

Williamson also suffered a right knee sprain during his freshman season at Duke, forcing him to miss nearly a month of action in the 2018-19 campaign.