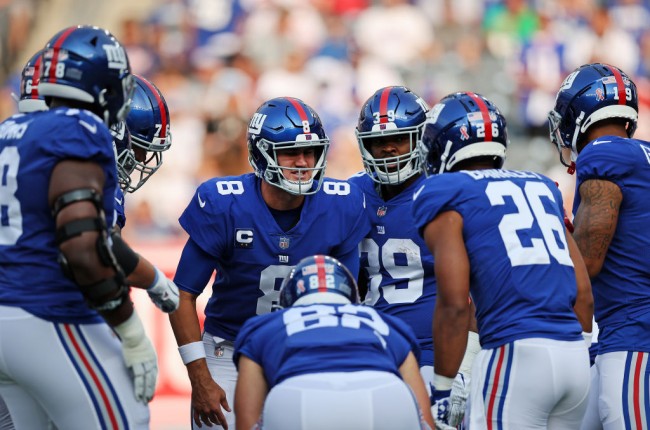 EAST RUTHERFORD, NEW JERSEY – Daniel Jones (#8) of the New York Giants talks with the offense in the huddle against the Denver Broncos during the first half at the MetLife Stadium on September 12, 2021 in East Rutherford, New Jersey. (Photo : Alex Trautwig/Getty Images)

The New York Giants and Washington Football Team absorbed disappointing losses on Sunday afternoon to open their respective 2021 NFL seasons. The two NFC East rivals will look to enter the win column when they face each other in an important Week 2 clash at the FedExField this coming Thursday.

The Giants’ 2021 NFL season is off to a horrible start after New York suffered an embarrassing 27-13 loss to Denver on Sunday. The Giants had no answer for new Broncos quarterback Teddy Bridgewater, who threw for 264 yards and a pair of touchdowns. It was another disappointing showing by the Giants, who have not been to the postseason since 2016.

They will look to get their season back on track when they square off with the Washington Football Team this coming Thursday. For the Giants to notch their first win of the campaign, they will need to get their offense going against Washington.

The Giants trailed the Broncos in several categories, including total yards, rushing yards, first downs, and time of possession. They finished the game with just 314 total yards, 106 less than the Broncos registered on Sunday.

The pressure now is on quarterback Daniel Jones to step up his game against Washington. He struggled to find the end zone against the Broncos, completing just 22 of 37 passes for 267 yards and just a solitary touchdown. The third-year quarterback also lost a fumble in the red zone, with New York trailing 20-7 in the third quarter.

man this is so funny to me. look at Daniel Jones trying to do Ball Security right before he fumbled. I don’t think his top arm is even touching the ball, he was securing the air pic.twitter.com/zMIzUOkp8s

With Jones struggling, the Giants may be better served by focusing their attack against Washington on their running game. The Giants managed just 65 yards rushing against Denver despite having Saquon Barkley back.

It’s paramount for the Giants to involve Barkley more against Washington. The 2018 NFL Offensive Rookie of the Year never got going against the Broncos, finishing with just 10 carries for 26 yards.

The injury bug has struck Washington just one week into the start of the 2021 NFL season. Starting quarterback Ryan Fitzpatrick suffered a right hip injury midway through the second quarter and didn’t return in Washington’s 20-16 loss to the Los Angeles Chargers.

According to NFL Network’s Ian Rapaport, the veteran QB is believed to have suffered a hip subluxation after taking a crunching hit from Chargers defender Uchenna Nwosu. The organization hopes that nothing is broken with Fitzpatrick’s hip, but he is still expected to miss multiple weeks because of the injury.

That’s a huge blow for Ron Rivera, who chose Fitzpatrick to be Washington’s starting quarterback after signing him to a one-year deal this past offseason. The good news for Washington is that they have a more than capable backup quarterback in Taylor Heinicke to pick up the slack.

This is one of the most unbelievable catches by @TheTerry_25. And a dime by Taylor Heinicke. pic.twitter.com/R8ngxWdNUp

In Fitzpatrick’s absence, he stepped up big time, completing 11 of 15 passes for 122 yards and a touchdown to keep the game close for Washington. He rose to prominence in Washington’s NFC wild-card loss to eventual champions Tampa Bay earlier this year, with Heinicke going toe to toe with now seven-time Super Bowl winner Tom Brady.

Washington wins and covers the spread.

Interdependent Relationship Between Neuroscience and AI