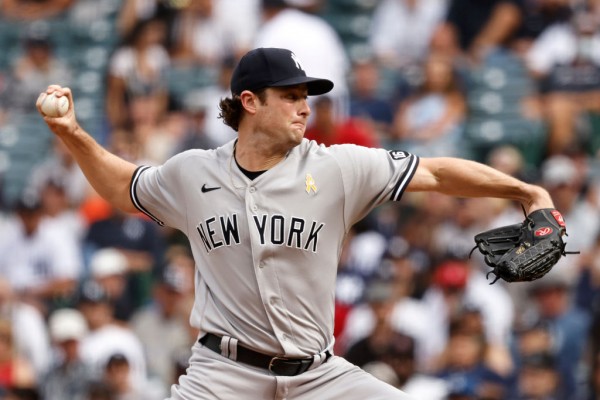 ANAHEIM, CALIFORNIA – Gerrit Cole of the New York Yankees pitches against the Los Angeles Angels during the first inning at the Angel Stadium of Anaheim on September 01, 2021 in Anaheim, California. (Photo : Michael Owens/Getty Images)

The New York Yankees and the Boston Red Sox will renew their storied rivalry in the 2021 American League Wild Card Game after booking their spots in the winner-take-all match in dramatic fashion on Sunday. Both teams’ biggest stars delivered huge hits in their respective final games of the regular season to set up Tuesday’s titanic clash at Fenway Park.

Aaron Judge was the hero for the Yankees in Game 162, driving home the winning run with a one-out single in the bottom of the ninth inning to secure a 1-0 victory over the Tampa Bay Rays at the Yankee Stadium. Rafael Devers delivered the killer blow for Boston on Sunday, blasting a two-run homer at the top of the ninth inning to break a 5-5 tie and give the Red Sox the all-important 7-5 win.

Those victories ended the postseason bids of the Toronto Blue Jays and the Seattle Mariners, who needed a defeat for either the Yankees or Red Sox on Sunday to give themselves a shot on a tiebreaker for the AL Wild Card.

Even though the Blue Jays won against the Orioles, they finished one game behind the Yankees and the Red Sox in the wild card race. On Sunday, the Mariners finished two games back after losing to Shohei Ohtani and the rest of the Los Angeles Angels.

It isn’t a complete surprise to see Gerrit Cole start for the New York Yankees in the AL Wild Card game. The Bronx Bombers splashed the cash on Cole mainly for postseason games like these. He has struggled lately, though, surrendering 15 runs over his final three starts. The $324 million man was taken deep five times during that stretch.

Cole is a different beast, though, come playoff time, and the Yankees hope that would be the case again on Tuesday night. He is 8-4 in 13 postseason starts, posting a 3.55 ERA and a 0.94 WHIP during that span. He has won six of his last seven postseason decisions, allowing two runs or less in six of his last eight playoff games.

Starting for Boston in this all-important showdown is Nathan Eovaldi. He has a good track record in the postseason, going 2-1 in six career playoff appearances with a 1.61 ERA and 0.81 WHIP. Eovaldi’s last start against the Yankees was abysmal, though, surrendering seven runs and seven hits in just 2.2 innings of action in an 8-3 loss against his former team.

Eovaldi has better pitching numbers at Fenway Park than on the road this season, posting a 3.47 ERA at home compared to 4.21 on the road. Eovaldi held opposing hitters to a low .241 batting average compared to .271 in away games when pitching at home.

ModelOps vs MLOps: Here is What You Need to Know