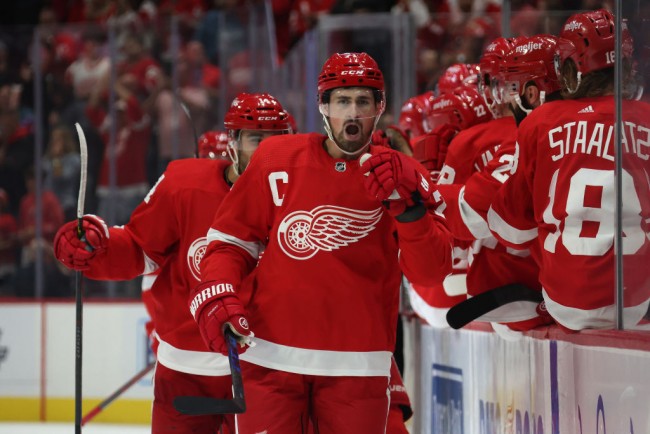 The NHL Department of Player Safety handed Detroit Red Wings captain Dylan Larkin a one-game suspension for roughing Tampa Bay forward Mathieu Joseph. The league announced Larkin’s penalty on Friday, adding that the Detroit star will have to give up $30,500 in salary, with the Players’ Emergency Assistance Fund set to receive that amount.

Larkin finds himself in hot water after punching Joseph

According to the NHL, Larkin was suspended for punching Joseph in the face when the latter was not suspecting it. Larkin retaliated after Joseph hit him from behind. Red Wings coach Jeff Blashill told reporters after the 7-6 loss to Tampa Bay that they can understand why Larkin was upset as he got hit on the boards when he was coming off.

He was assessed a match penalty for the punch on Joseph in the second period, quickly ending his night on the ice after he scored the game’s opening goal. Larkin’s dismissal proved costly for the Red Wings, who surrendered a three-goal lead three times in the season opener before eventually losing to the Lightning in overtime.

The hit brought back painful memories for Larkin, who was limited to 44 games last season after Dallas Stars’ Jamie Benn cross-checked him in the back of the neck with his stick back in April. Larkin was unable to practice on Friday because of Joseph’s hit, with concerns growing that the former suffered another injury to the neck/shoulders area.

However, that does not excuse Larkin’s actions, with the NHL saying in its statement that “this is not a case of two players who willingly engage in a mutual confrontation.” The league said that Joseph had no warning that he was about to be punched, and Larkin gave him no time to “brace for contact, defend himself, or choose to engage in the altercation.”

The league acknowledged Larkin’s frustration with Joseph’s hit, but the former cannot be excused from punishment merely because he is acting in response to the actions of the latter. What causes Larkin’s actions to rise to the level of supplemental discipline, according to the Department of Player Safety, is the “retaliatory nature of the punch, and the force with which it is delivered to an unsuspecting opponent.”

Teammate Robby Fabbri sympathized with Larkin, saying that he did not like the hit at all. Fabbri added that he was not surprised at how Larkin reacted, given what he has been through the last three months with his neck injury.

It has been a tough start to the season for Larkin, who was suspended for the first time in his 433-game career in the NHL. He will miss the Red Wings’ next home game on Saturday night against the Vancouver Canucks.

Do’s and Don’ts in a Robotics Interview

How Do VR and AR Play a Big Role in Pediatrics?