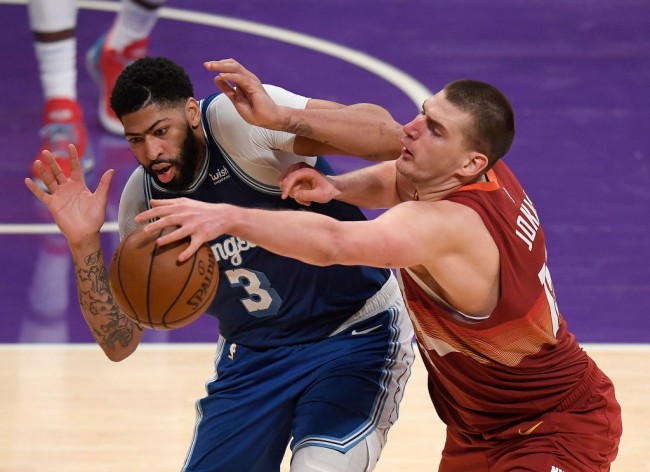 LOS ANGELES, CALIFORNIA – Anthony Davis (#3) of the Los Angeles Lakers and Nikola Jokic (#15) of the Denver Nuggets chase after a rebound during a 114-93 Lakers win at the Staples Center on February 04, 2021 in Los Angeles, California. (Photo : Harry How/Getty Images)

Fans of the Denver Nuggets and the Los Angeles Lakers heaved a huge sigh of relief after superstars Nikola Jokic and Anthony Davis avoided serious knee injuries in their recent outings. No structural damage was found in Jokic and Davis’ knees after taking hits in their respective games against the Utah Jazz and the San Antonio Spurs.

Nikola Jokic suffered a contusion in his right knee during the second quarter of Tuesday’s game against the Jazz. Rudy Gobert was making a driving move along the baseline when he banged knees with Jokic. The league’s reigning MVP immediately went down in a great deal of pain as he clutched his injured right knee.

The Serbian star left the game with 1:54 left in the second quarter and was initially listed as questionable to return by the Nuggets. Jokic was spotted on the court at halftime, however, doing warm-ups after the injury scare. Head coach Mike Malone decided not to risk it with his main star, shutting him down for the remainder of the game.

That ended what could have been a career night for Jokic. He started the game like a house on fire, scoring 24 points, grabbing six rebounds, and dishing out six assists in just 15 minutes of action in the first half. Jokic entered that game averaging 27.7 points, 16.0 rebounds, and 4.0 assists.

Malone’s decision to bench Jokic made perfect sense, given that the 2021-22 season is just a few games old. The Nuggets can ill afford to lose Jokic for a long time given that they are already without Jamal Murray, who is still recovering from a torn ACL he suffered back in April.

Davis picks up injury after banging knees with Dejounte Murray

Anthony Davis was also fortunate to avoid a season-ending knee injury against the San Antonio Spurs. In the fourth quarter of that contest, Davis went down in severe pain after he banged knees with Spurs guard Dejounte Murray.

However, Davis shrugged off the injury and led the Lakers to a 125-121 overtime win over the Spurs. He eased fans’ concerns further when he suited up for the Lakers against the Oklahoma City Thunder in the second game of a back-to-back set.

The Lakers looked to be on their way to a third consecutive win after building a 26-point lead late in the second quarter. However, they suffered a monumental collapse as the Thunder turned a 44-70 deficit into a 123-115 victory in the end.

The momentum swung in Oklahoma City’s favor in the third quarter, with the Thunder outscoring the Lakers, 41-23, during that period. It was a disappointing defeat for the road-weary Lakers, who missed the services of LeBron James, who was still sidelined with an ankle injury.