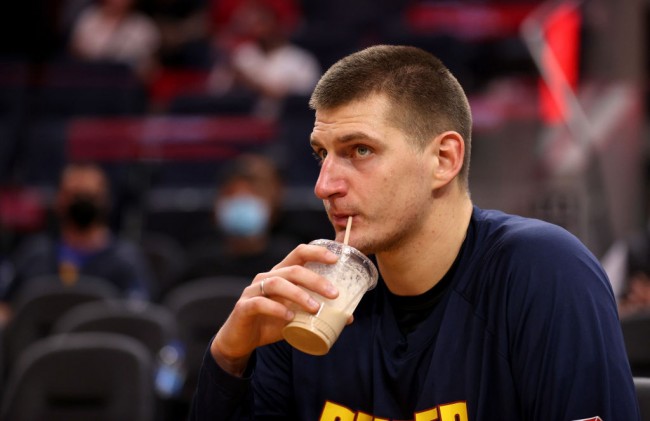 SAN FRANCISCO, CALIFORNIA – Nikola Jokic of the Denver Nuggets takes a drink on the bench during their game against the Golden State Warriors at Chase Center on October 06, 2021 in San Francisco, California. (Photo : Ezra Shaw/Getty Images)

The NBA suspended Denver Nuggets star center Nikola Jokic for one game without pay after his retaliatory hit on Miami Heat forward Markieff Morris from behind. Jokic will now miss the Nuggets’ game against Indiana on Wednesday.

The league also dished out fines on Morris and Jimmy Butler for their involvement in the fracas. Morris was fined $50,000 for his flagrant two fouls on Jokic, while Butler was fined $30,000 for attempting to escalate the altercation on Monday night. Also contributing to Butler’s heavy fine was his non-compliance with an NBA security interview.

The incident took place with 2:39 remaining in Denver’s 113-96 win over Miami. Jokic brought the ball down the court after getting the rebound and made a pass near midcourt. Morris had bad intentions when fouling Jokic with his left elbow, hitting the Serbian big man on his exposed right side while delivering the pass.

Jokic lost it after the dirty play, hitting Morris with a cheap shot of his own. Jokic delivered a crunching right forearm shove to Morris’ back with his weight behind him, sending the Heat player crashing to the floor. Jokic was ejected after the incident.

Heat head coach Erik Spoelstra did not mince any words when talking about Jokic’s retaliation, saying it was a dangerous and dirty play. Jokic expressed remorse when speaking to reporters after the game, saying, “It’s a stupid play. I feel bad. I am not supposed to react that way.” Jokic added that he needed to protect himself after Morris’ dirty play, but he felt bad because he was not supposed to react that way.

The feud between the two players intensified even further when the brothers of Morris and Jokic weighed in on the incident on social media. Marcus Morris did not like Jokic’s hit on his twin brother one bit, tweeting, “Waited till bro turned his back smh. NOTED.”

Jokic’s brothers did not take kindly to Marcus’ statement, with Nemanja and Strahinja even opening a Twitter account named @JokicBrothers to respond to Morris’ threat. They tweeted, “You should leave this the way it is instead of publicly threatening our brother! Your brother made a dirty play first. If you want to make a step further be sure we will be waiting for you !! Jokic Brothers.”

Charles Barkley and Shaquille O’Neal shared their thoughts about the altercation on “Inside the NBA” Tuesday night, with the two Hall of Famers lending their support to Jokic’s retaliation. O’Neal and Barkley liked that the Serbian took matters into his own hands after Morris’ hit, saying that the Heat forward had it coming when he turned his back on the Joker.

Top 10 Cryptocurrencies to Invest in This November Weekend