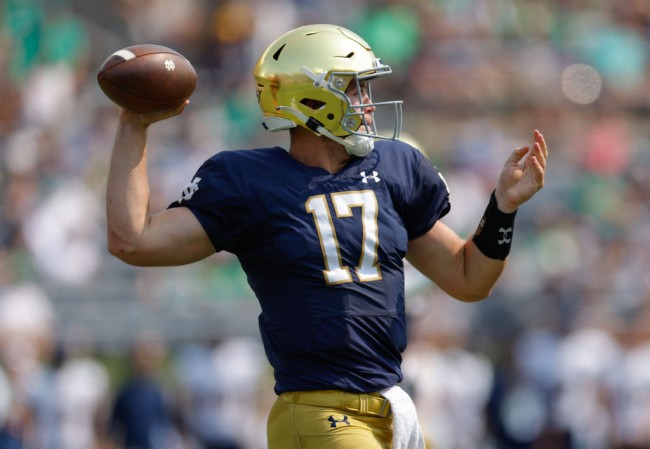 SOUTH BEND, IN – Jack Coan of the Notre Dame Fighting Irish throws the ball during the first half against the Toledo Rockets at the Notre Dame Stadium on September 11, 2021 in South Bend, Indiana. (Photo : Michael Hickey/Getty Images)

A blockbuster showdown will be heading our way this coming Saturday as the Notre Dame Fighting Irish and the Wisconsin Badgers lock horns at the Soldier Field. Can Jack Coan and the Irish maintain their perfect start to the season in this Notre Dame vs. Wisconsin clash? Read our preview to see who has the edge.

On Saturday, Notre Dame will head to its Week 4 clash with Wisconsin with momentum on its side after beating Purdue, 27-13. It was another huge victory for the Fighting Irish, who have now won 26 straight games at home. Their 14-point win over the Boilermakers was their biggest margin of victory this season.

The key to Notre Dame’s strong start has been its solid play on the offensive end. The Irish are averaging 33.3 points per game this season. Kyren Willams starred for Notre Dame in the win against Purdue, scoring two long touchdowns. He wreaked havoc both through the air and on the ground, catching two passes for 47 yards and running for 86 yards on 11 carries.

However, there’s a growing concern regarding Notre Dame’s offensive line heading into the game against Wisconsin. The Irish have allowed 14 sacks this season, tied for second-most in the nation. Jack Coan was sacked four times on Saturday and struggled with his accuracy as a result, completing just 15 of 31 passes for 223 yards and a couple of touchdowns.

Wisconsin finally barged into the win column with an emphatic 34-7 victory over the Eastern Michigan Eagles on September 12. It was a huge bounce-back win for the Badgers, who suffered a heartbreaking 16-10 loss to Penn State in their opening game.

The Badgers used their ground game to pummel the Eagles, rushing for 352 yards in that contest. Chez Mellusi was unstoppable against Eastern Michigan, running for 144 yards and a touchdown on 20 carries.

One guy who needs to step up for Wisconsin in the game against Notre Dame is Graham Mertz. The sophomore quarterback has started slowly this season as he has yet to throw a touchdown pass through Wisconsin’s first two games. Mertz became Wisconsin’s QB1 after Jack Coan injured his foot last season.

Coan transferred to Notre Dame after the 2020 season, setting up an intriguing subplot to this meeting between the Irish and the Badgers. Coan has been flourishing in his new surroundings, passing 828 yards and eight touchdowns to start his Notre Dame career.

The good news for the Badgers is that they will get back one of their best pass rushers for this contest. Linebacker Leo Chenal missed the first two games of Wisconsin due to COVID-19, but he has been cleared to face Notre Dame. He will help boost a Badgers defense that has recorded just four sacks this season.