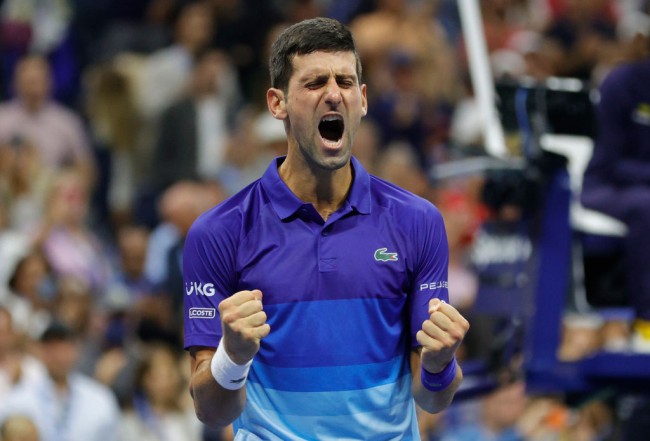 NEW YORK, NEW YORK – Novak Djokovic of Serbia celebrates winning a match point to defeat Alexander Zverev of Germany during their Men’s Singles semifinal match on Day 12 of the 2021 US Open at the USTA Billie Jean King National Tennis Center on September 10, 2021 in the Flushing neighborhood of the Queens borough of New York City. (Photo : Sarah Stier/Getty Images)

Novak Djokovic moved to within a victory of achieving the historic Calendar Slam after beating Alexander Zverev in an epic five-set thriller in the semifinals of the 2021 US Open at Arthur Ashe Stadium on Friday.

The world no. 1 needed three hours and 35 minutes to pull off the 4-6, 6-2, 6-4, 4-6, 6-2 victory over Zverev as he improved to a perfect 27-0 in Grand Slam matches this year. It was sweet revenge for Djokovic, who lost to Zverev in the semifinals of the men’s singles event at the Tokyo Olympics, denying him a shot at completing the Olympic Slam.

Djokovic battles past Zverev to earn a date with destiny

The Calendar Slam is still in play with Djokovic on the precipice of becoming the first male tennis player since the great Rod Laver in 1969 to win all four major tournaments in the same year. Djokovic has already won the Australian Open, French Open, and the Wimbledon Championships this year.

Djokovic’s victory in the semifinals wasn’t easy by any means as he had to battle back from a set down to defeat Zverev. This was the 10th time this season at a Grand Slam event that Djokovic had dropped the opening set against his opponent. Losing the first set against Zverev was a more difficult challenge, though, as the German was amidst a 16-game winning streak.

However, Djokovic thrives in these pressure-packed moments, and he quickly grabbed the initiative back by winning the next two sets. Zverev pushed the match into a winner-take-all fifth set, but it was all Djokovic in the decider, storming to a quick 5-0 lead before eventually taking it 6-2.

Djokovic looked forward to his date with destiny during Friday’s post-match interview, saying, “There is only one match left. All in. Let’s do it… I’m going to treat the next match like it’s the last match of my career.”

Medvedev to provide Djokovic a stern test in the final

Standing in Djokovic’s way in that championship match is Daniil Medvedev. The world no. 2 booked a place in this year’s US Open final after beating Felix Auger-Aliassime in straight sets in the semifinals. The Russian star needed just two hours and three minutes to record a 6-4, 7-5, 6-2 win over Auger-Aliassime.

Medvedev was simply unstoppable in the semis, firing off 37 winners compared to just 17 from his Canadian opponent. He has been in excellent form in this tournament, dropping just a single set on his way to the final.

He will have his work cut out against Djokovic, who leads their head-to-head matchup, 5-3. They have already faced each other in a Grand Slam final this year, with Djokovic defeating Medvedev in straight sets in the championship match of the 2021 Australian Open.