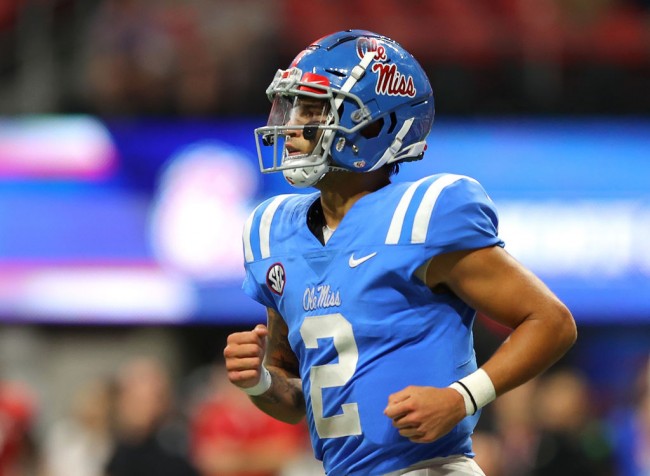 ATLANTA, GEORGIA – Matt Corral of the Mississippi Rebels reacts after Snoop Conner (#24) rushed for a touchdown against the Louisville Cardinals during the first half of the Chick-fil-A Kick-Off Game at the Mercedes-Benz Stadium on September 06, 2021 in Atlanta, Georgia. (Photo : Kevin C. Cox/Getty Images)

Ole Miss Football is legit. The Associated Press included the Rebels in their Top 25 poll ahead of this week’s matches, listing Ole Miss as the No. 20-ranked team in the country, the first time they have been nationally ranked since the week of October 16, 2016.

The Rebels’ inclusion in the Top 25 poll further drove home the argument that the SEC is the strongest conference in college football. Five other SEC teams made it to the Top 25 after Week 1: No. 1 Alabama Crimson Tide, No. 2 Georgia Bulldogs, No. 5 Texas A&M Aggies, No. 13 Florida Gators, and No. 25 Auburn Tigers. The LSU Tigers failed to join their SEC colleagues in the prestigious poll after absorbing a shocking defeat to the UCLA Bruins last Saturday.

Rebels’ 2021 season off to a terrific start after Louisville beatdown

The Rebels got a lot of respect from the national press after their fantastic showing in their season opener against the Louisville Cardinals. Quarterback Matt Corral starred for Ole Miss in that contest, completing 22 of 32 passes for 381 yards and a touchdown. Corral, who also rushed for 55 yards and a score on 12 carries, made sure the rock was evenly distributed, with five players catching 20 yards or longer passes.

Much is expected from Corral this season after producing a stellar 2020 campaign. He started all ten games for the Rebels last year, completing 70 percent of his passes, resulting in 3,337 yards and 29 touchdowns. Corral was the nation’s seventh-ranked quarterback in terms of passing percentage, passing yards, and touchdowns.

Corral’s terrific start to the 2021 season was no surprise, given that he has a plethora of weapons on the offensive end, including fellow returnees Dontario Drummond and Jerrion Ealy. Drummond torched Louisville’s secondary in Monday’s contest, leading all receivers with 177 yards and one touchdown on nine catches.

Related Article: Huge Blow for Michigan: Wolverines WR Ronnie Bell Out for the Season Due to Right Knee Injury

However, it was the Rebels’ defense who stole the show in the win against the Cardinals. They held Louisville scoreless in the first half, marking the first time since Ole Miss’ victory over Georgia in 2016 that they shut out a Power Five offense during the game’s opening two quarters.

The Rebels also held the Cardinals to just 200 passing yards, an achievement Ole Miss pulled off just once in 2020. That will serve the Rebels in good stead ahead of their Week 2 clash against the Austin Peay Governors this coming Saturday.

Ben Roethlisberger Takes T.J. Watt's Side in Pay Dispute With Steelers; Will He Play in Week 1 vs. Bills? : NFL : Sports World News