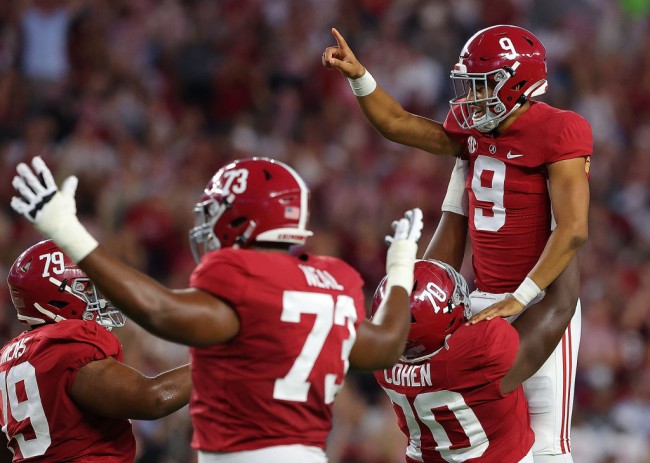 TUSCALOOSA, ALABAMA – Bryce Young (#9) of the Alabama Crimson Tide reacts after passing for a touchdown against the Southern Miss Golden Eagles during the first half at the Bryant-Denny Stadium on September 25, 2021 in Tuscaloosa, Alabama. (Photo : Kevin C. Cox/Getty Images)

No. 1 Alabama and No. 12 Ole Miss will put their unbeaten records on the line when they square off this coming Saturday in a mouth-watering SEC clash. Both teams are playing some fantastic football of late, so expect a gripping matchup between these two conference rivals. Read on for a preview of the Ole Miss vs. Alabama clash.

The Ole Miss Rebels are flying high now, having just completed an unbeaten month of September for the first time since 2015. They managed to do so in style, defeating Louisville, Austin Peay, and Tulane by an average winning margin of 32 points.

Quarterback Matt Corral has been superb for the Rebels to start the season, throwing 997 yards with nine touchdowns and no interceptions. Corral was outstanding on passing downs in their last game against Tulane, completing 7 of 8 passes for 119 yards with two touchdowns.

Corral has benefited from the excellent play of receivers Dontario Drummond, Jonathan Mingo, and Braylon Sanders. They have combined for 43 receptions, 762 yards, and nine touchdowns through Ole Miss’ first three games in 2021.

Things are bound to get more challenging, though, for the unbeaten Rebels as standing in their way in the next game are the Alabama Crimson Tide. The Rebels have lost each of their last five meetings against the Tide. Their last matchup was a high-scoring affair, with Alabama defeating Ole Miss, 63-48.

Drummond, Mingo, and Sanders will need to find ways to dissect an Alabama secondary that allows just 168.2 yards per game through the air this season, 21st in the FBS.

On Saturday, the Alabama Crimson Tide will head to their SEC showdown with Ole Miss with momentum on their side after trouncing the Southern Miss Golden Eagles, 63-14. It was another impressive victory by the Tide, who improved their season record to 4-0. They have won their first four games by an average of 29 points.

The key to Alabama’s sizzling start has been its red-hot offense. The Crimson Tide are averaging 46.5 points per game this season, the third-best in the entire FBS. Just like in their opening three victories, Bryce Young took center stage for the Crimson Tide against the Golden Eagles. He completed 20 of 22 passes for 313 yards with five touchdowns.

Jameson Williams also starred for the Tide, with the Ohio State transfer opening the game with a 100-yard kickoff return. He then clinched an 81-yard touchdown reception on his second touch before recording an 83-yard runback. It was a historic performance by Williams, who became the first Alabama player to record two kick return touchdowns in a game.

The Crimson Tide will be licking their chops at the prospect of facing the Rebels as they have fared extremely well against them of late. Alabama has averaged 59.6 points in its last five games against Ole Miss, all of which resulted in victories for the Tide.

Alabama wins and covers the spread.

Bitcoin Price Reaches US$50,000 After a Month! What to Expect Now?