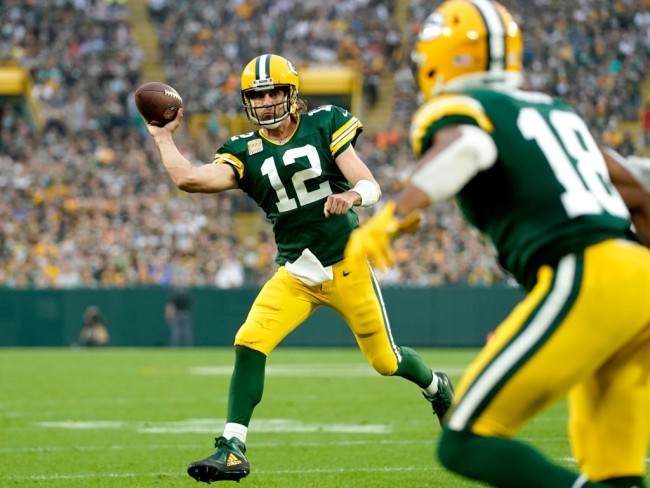 GREEN BAY, WISCONSIN – Aaron Rodgers (#12) of the Green Bay Packers throws the ball to Randall Cobb (#18) for a touchdown during the fourth quarter against the Pittsburgh Steelers at the Lambeau Field on October 03, 2021 in Green Bay, Wisconsin. (Photo : Patrick McDermott/Getty Images)

This coming Sunday, two red-hot teams will lock horns as the Cincinnati Bengals host the Green Bay Packers in a critical Week 5 clash at the Paul Brown Stadium. Which side will record its fourth win in this Packers vs Bengals game? Here’s our preview to see who has the advantage in this contest.

On Sunday, Green Bay stretched its winning run to three games with a 27-17 victory over the Pittsburgh Steelers. It was a big win for the Packers, who maintained their one-game advantage atop the NFC North standings.

Aaron Rodgers led the way for Green Bay in the Week 4 win, completing 20 of 36 passes for 248 yards and a pair of touchdowns. Rodgers, who also ran for another score, connected with old pal Randall Cobb for a couple of touchdowns.

With his three total touchdowns against the Steelers, Rodgers became the first player in the history of the Packers franchise to record 500 total touchdowns during the regular season and the playoffs.

What does 420 Pass TD mean to Aaron Rodgers?

“It means I’ve been playing a long time.” – @packers All-World QB says with a smile pic.twitter.com/WBDHuImGza

The Bengals will provide a much tougher test, though, against the Packers in Week 5. Cincinnati is eighth in the league in scoring defense, allowing 18.8 points per game this season.

The Cincinnati Bengals will head to their showdown against the Green Bay Packers with momentum on their side after recording a thrilling 24-21 victory over the Jacksonville Jaguars on Thursday Night Football. It was an impressive win for the Bengals, who improved to 3-1 for the first time since 2018.

Joe Burrow starred for the Bengals, who battled back from a 14-point halftime deficit. He completed 25 of 32 passes for 348 yards with two touchdowns and no interceptions. Burrow turned things around in the second half, leading Cincinnati to four straight scoring drives during this period.

Burrow’s pocket movement allows him to find Uzomah to tie it up!

Burrow made history with that performance, joining Hall of Famers Dan Marino, Peyton Manning, and Kurt Warner as the only second-year quarterbacks in the NFL to record at least two passing touchdowns in each of their team’s first four games of the season during the Super Bowl era.

He got some help from running back Joe Mixon, who ran for 67 yards and a score. However, Mixon’s status for the Week 5 game against the Packers remains uncertain after being diagnosed with a low-grade ankle sprain. According to Bengals coach Zac Taylor, he picked up the injury late in the Week 4 win and has been classified as day-to-day.