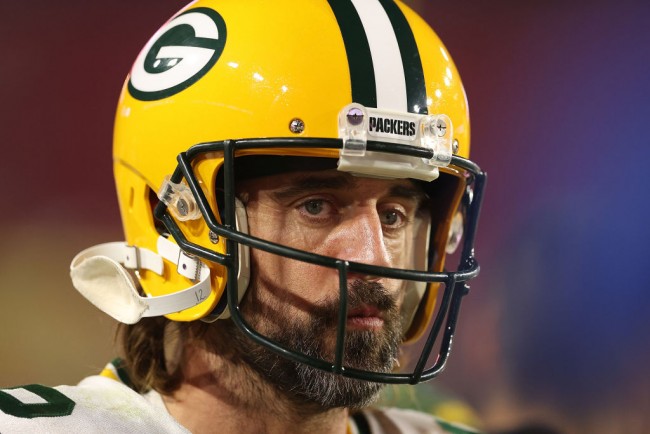 GLENDALE, ARIZONA – Aaron Rodgers of the Green Bay Packers watches action during the second half of a game against the Arizona Cardinals at State Farm Stadium on October 28, 2021 in Glendale, Arizona. (Photo : Christian Petersen/Getty Images)

Green Bay’s preparations for its much-anticipated showdown with Kansas City took a huge hit on Wednesday after star quarterback Aaron Rodgers tested positive for COVID-19. He has been ruled out for Sunday’s clash, leaving Jordan Love as the Packers’ starter for that match against the Chiefs. Can Green Bay defy the odds for the second week running and record the upset win in the Packers vs Chiefs Week 9 game?

Aaron Rodgers’ decision not to get vaccinated has put the Green Bay Packers in an undesirable spot ahead of Week 9 after testing positive for the deadly coronavirus. Rodgers will now miss the game against the Chiefs and possibly the Week 10 game, as well as the league mandates unvaccinated players who tested positive to quarantine for a minimum of 10 days.

Rodgers cannot return until November 13 at the earliest, and he can only do so if he remains asymptomatic. Rodgers underwent alternate treatment before the start of training camp, with the Packers’ QB petitioning the NFL to consider him as someone who already received one of the approved vaccinations.

Thought this was interesting:

Here’s Aaron Rodgers in that same press conference when asked about the importance of getting the vaccine pic.twitter.com/8qBzw5KKuK

The league denied his request and has considered him unvaccinated since the start of the 2021 season. When asked about his vaccination status back in August, the reigning league MVP said he was “immunized.” Questions now are being asked whether Rodgers misled the public and lied about getting the vaccine.

With Rodgers sidelined for the foreseeable future, Jordan Love is in line to make his first career NFL start against the Chiefs. The Packers are also expected to sign veteran quarterback Blake Bortles to their practice squad.

The Kansas City Chiefs may have won their Monday Night Football showdown against the New York Giants, but they still looked out of sorts in that primetime clash. The Chiefs committed 12 penalties for 103 yards in their 20-17 win, the fourth consecutive game in which they had multiple turnovers.

The Chiefs now have 19 turnovers this season. Patrick Mahomes’ struggles continued in Week 8, completing just 29 of 48 passes for 275 yards with one touchdown and one interception. Mahomes started strongly against the Giants, completing his first eight passes. Mahomes’ game unraveled, though, when he threw a pick on his ninth pass.

He completed just 6 of 19 passes the rest of the first half. Mahomes’ 4.3 yards per attempt during that period was his lowest in an opening half this season. Mahomes will need to be at his best against a Packers defense that limited the red-hot Arizona Cardinals to just 21 points in Week 8.

How VR and AR are Changing the Fitness Industry?

Career Growth for Automotive Software Engineer: A Complete Guide for You