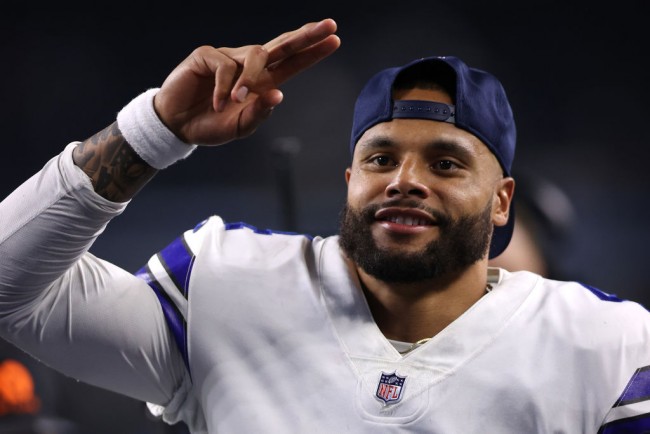 ARLINGTON, TEXAS – Dak Prescott of the Dallas Cowboys celebrates a 41-21 win over the Philadelphia Eagles at the AT&T Stadium on September 27, 2021 in Arlington, Texas. (Photo : Tom Pennington/Getty Images)

This season, the Carolina Panthers preserved their unbeaten slate with an impressive 15-point victory over the Houston Texans on Thursday. The Panthers will look to sustain their hot start this coming Sunday when they square off with the Dallas Cowboys in a blockbuster matchup at the AT&T Stadium. Read our preview of this Panthers vs Cowboys clash to see who has the advantage.

The Carolina Panthers will head to their showdown against the Dallas Cowboys with momentum on their side after recording a 24-9 victory over the Houston Texans on Thursday Night Football. It was an impressive win for the Panthers, who improved to 3-0 for the first time since 2015.

Sam Darnold is now tied for the league lead in rushing TDs. pic.twitter.com/12Ub0t8fGO

The Panthers have some major injury concerns heading into their Week 4 clash with Dallas. Star running back Christian McCaffrey injured his hamstring in the second quarter of that win against Houston and will miss Sunday’s game against the Cowboys.

The good news for Carolina fans is that McCaffrey hasn’t been placed on the injured reserve list, so he may make a possible return in Weeks 5 or 6. That won’t be the case for cornerback Jaycee Horn, who is expected to miss 2-3 months after breaking multiple bones in his foot in a non-contact injury during Thursday’s win against the Texans.

After suffering a groin injury in that Week 3 win, safety Justin Burris was also placed on the injured reserve list. The Panthers have bolstered their defensive ranks, acquiring 2020 first-round pick C.J. Henderson and a fifth-round pick from the Jacksonville Jaguars in exchange for tight end Dan Arnold and a 2022 third-round pick. Henderson is expected to play for Carolina in Week 4.

Dallas extended its winning streak to two games with a comprehensive 41-21 victory over the Philadelphia Eagles on Monday Night Football. It was a critical win for the Cowboys, who now hold a one-game lead atop the NFC East standings.

Dak Prescott led the way for Dallas in this one-sided win, completing 21 of 26 passes for 238 yards and three touchdowns. Prescott delivered in his first home game since suffering a gruesome ankle injury that ended his 2020 season prematurely.

Prescott got some help from Ezekiel Elliott, who rushed for a season-high 95 yards and scored two touchdowns on the ground. Tight end Dalton Schultz starred for the Cowboys as well, recording the first two-touchdown game of his career in the win against the Eagles.

Invest Your Way through these Top 5 Tech Stocks Today