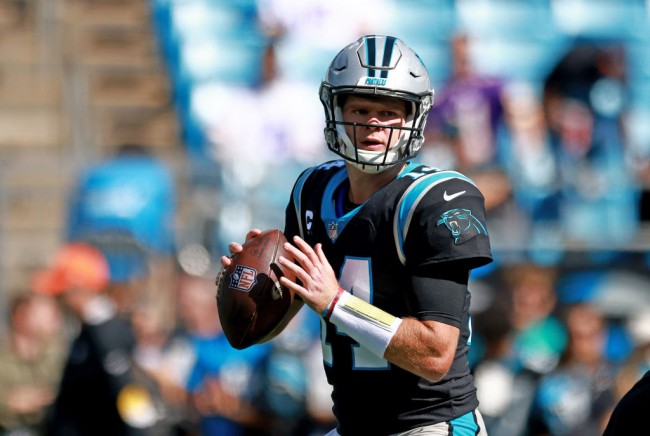 CHARLOTTE, NORTH CAROLINA – Sam Darnold of the Carolina Panthers warms up during their game against the Minnesota Vikings at the Bank of America Stadium on October 17, 2021 in Charlotte, North Carolina. (Photo : Grant Halverson/Getty Images)

This coming Sunday, a critical NFC matchup will be heading our way as the New York Giants host the Carolina Panthers at the MetLife Stadium. Which team will end its losing rut in this game? Here’s a preview of this Panthers vs Giants showdown.

Things are going from bad to worse for the Carolina Panthers as they absorbed their third consecutive defeat with a gut-wrenching 34-28 overtime loss to the Minnesota Vikings in Week 6. After opening the season with three straight victories, the Panthers now head into Week 7 with an even 3-3 slate. They are now two games behind leaders Tampa Bay Buccaneers in the NFC South standings.

They will look to get their season back on track when they face the injury-plagued New York Giants this coming Sunday. For the Panthers to end their losing skid, they will need to do a much better job on the defensive end. They surrendered 571 total yards in the loss to the Vikings, 379 of which came after halftime.

Sam Darnold interception on the first play of the game 😬

It is important for the Panthers that Sam Darnold gets his game going against New York. He struggled mightily in the loss to Minnesota, completing just 17 of 41 passes for 207 yards with one touchdown and two turnovers. The Panthers’ receivers did not help Darnold’s cause as they recorded eight drops in this contest, six of which came from Robby Anderson and D.J. Moore.

Injury problems are mounting for the New York Giants ahead of their Week 7 clash with the Carolina Panthers. The Giants lost another integral piece to their offensive line when they placed left tackle Andrew Thomas on injured reserve. Thomas suffered a right ankle injury in the 38-11 loss to the Los Angeles Rams, adding to the left foot injury he had been dealing with the previous weeks.

He will now miss the Giants’ next three games against Carolina, Kansas City, and Las Vegas. Thomas is eligible to return after the Giants’ bye week when they play the Tampa Bay Buccaneers in a Monday Night Football showdown.

The Giants are now without 60 percent of its Week 1 offensive line with Thomas’ latest injury. Center Nick Gates broke his leg while guard Shane Lemieux injured his knee earlier this season, with both players ruled out for the remainder of the campaign.

Another player who is expected to miss some time for New York is rookie wide receiver, Kadarius Toney. He aggravated an ankle injury on the Giants’ opening drive against the Rams, leaving their injury-plagued offense even thinner. They played the Rams without running back Saquon Barkley, who was sidelined with an ankle injury, and wide receivers Darius Slayton (hamstring) and Kenny Golladay (knee).

Wide receiver and kick returner C.J. Board was also placed on injured reserve after breaking his arm in the loss to the Rams.

Carolina wins and covers the spread.