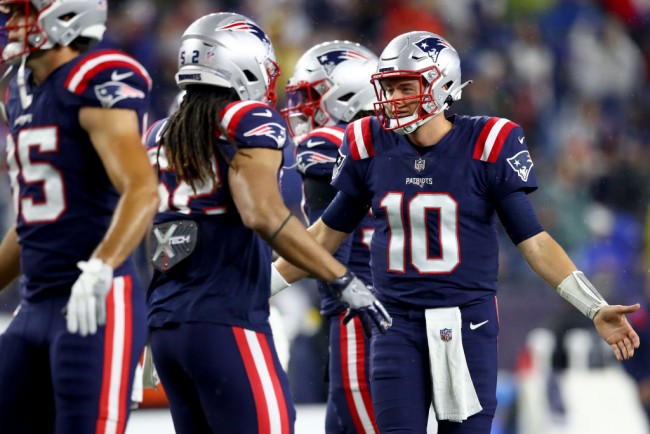 FOXBOROUGH, MASSACHUSETTS – Mac Jones (#10) of the New England Patriots reacts against the Tampa Bay Buccaneers during the first half in the game at the Gillette Stadium on October 03, 2021 in Foxborough, Massachusetts. (Photo : Adam Glanzman/Getty Images)

A losing skid will end this Sunday as the Houston Texans and the New England Patriots square off in a battle of 1-3 teams. Read our preview of the Patriots vs Texans matchup to see who has the advantage in this AFC clash.

New England may have suffered a two-point loss to Tampa Bay in Week 4, but there were still plenty of positives for the Patriots to take heading into their clash with Houston this coming Sunday. Even though they lost 19-17 to the Bucs on Sunday Night Football, the Pats will take comfort in the fact that they gave their favored opponents fits the entire contest.

The Pats were denied a famous win in Tom Brady’s return to New England, with Nick Folk missing a potential game-winning 56-yard field goal attempt in the final minute. Unfortunately for Bill Belichick, his decision to go for a field goal that long in the rain backfired, with Folk’s attempt hitting the left upright.

The future is bright for New England, though, with Mac Jones outplaying Brady in the much-hyped clash. The former Alabama standout completed 31 of 40 passes for 275 yards with two touchdowns and one interception against the reigning Super Bowl champs.

Jones will look to continue his outstanding play against a Texans team that is fifth-worst in the NFL in scoring defense, allowing 29.0 points per game this season.

The Texans delivered one of the worst performances in NFL history on Sunday, losing 40-0 to the Buffalo Bills in Week 4. That 40-point loss was the Texans’ biggest defeat in franchise history by point differential, eclipsing the 38-point drubbing they suffered at the hands of the Jacksonville Jaguars in 2017.

The Texans struggled mightily on the offensive end in the opening half, recording minus-23 net passing yards during that period. That’s the fewest by any team in a first half since the Philadelphia Eagles on November 21, 1999.

Davis Mills got exposed in his second career NFL start, completing 11 of 21 passes for 87 yards with four interceptions in the loss to the Bills. Mills, who was sacked three times, had a passer rating of 23.4 against Buffalo. It won’t get any easier for Mills and co. in Week 5 as they will face the New England Patriots next.

Belichick has fared extremely well against rookie quarterbacks since taking over as coach of the Pats in 2000, with the six-time Super Bowl champion coach carrying a 22-6 record against first-year signal callers. This season, he is 1-0 against rookie QBs, with New England’s lone victory this year coming against the Zach Wilson-led New York Jets.