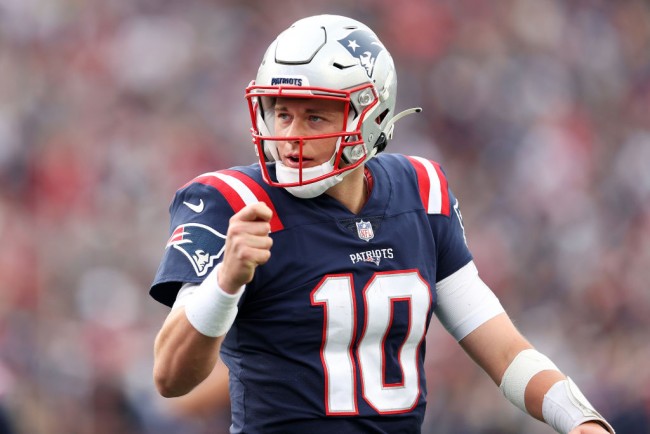 FOXBOROUGH, MASSACHUSETTS – Mac Jones #10 of the New England Patriots celebrates the touchdown by Rhamondre Stevenson #38 against the Cleveland Browns during the third quarter at the Gillette Stadium on November 14, 2021 in Foxborough, Massachusetts. (Photo : Maddie Meyer/Getty Images)

The New England Patriots have flourished on the road this season, winning all four of their away games in 2021. The Patriots will look to continue that perfect start when they travel to Georgia in Week 11 to face the Atlanta Falcons on Thursday Night Football. Read on for a preview of this Patriots vs Falcons clash.

The New England Patriots extended their winning streak to four games with an impressive 45-7 victory over the Cleveland Browns at Gillette Stadium. It was a critical victory for the Patriots, who kept pace with leaders Buffalo Bills in the AFC East standings, trailing them by just a half-game heading into Week 11.

In their latest win, Mac Jones starred for the Pats, completing 19 of 23 passes for 198 yards with three touchdowns and no interceptions. Hunter Henry was the main beneficiary of Jones’ highly efficient play, catching two touchdown passes. Even the much-maligned Jakobi Meyers contributed for New England as he clinched his first career touchdown reception late in the fourth quarter.

Rhamondre Stevenson gets in the end zone and the Patriots take the lead. (PS: watch N’Keal Harry take Myles Garrett out of the play.) Video via @BenBrownPL

The Patriots also had their ground game going against the Browns, racking up 184 yards rushing in Week 10. Rookie Rhamondre Stevenson put on quite a show, rushing for a career-high 100 yards and a couple of scores. He stepped up big time in the absence of Damien Harris, who was out due to a concussion.

The Atlanta Falcons came crashing back to earth in Week 10 with a humiliating 43-3 loss to the Dallas Cowboys. The Falcons had no answer for the Cowboys’ passing game, with Dallas racking up 317 yards through the air on Sunday.

It is back to the drawing board for the Falcons, who failed to take advantage of Tampa Bay’s loss to Washington. For Atlanta to get its season back on track against New England, it needs to get a much-improved performance from Matt Ryan.

He struggled mightily against the Cowboys in Week 10, completing just 9 of 21 passes for 117 yards with no touchdowns and two interceptions. Ryan, who was also sacked twice in this contest, did not get much help from his running backs as they recorded just 103 rushing yards on 24 carries against the Cowboys.

Such was Ryan’s mediocrity that he was pulled by the Falcons before the end of the third quarter, with Atlanta already down by 40 points at that stage. The Falcons’ offense had a rough day in the office; recording season worsts in third-down conversions (1 of 11) and first downs (11). Atlanta’s 214 yards of total offense in Week 10 was just one more than its season low.

It won’t get any easier for them against a New England side that held the Cleveland Browns to just 217 total yards in Week 10. The Patriots stifled the Browns all afternoon, with Cleveland converting just one of its 11 third down opportunities.

A Powerful Leader Creating Impact in the Exiting Clean-Tech Industry