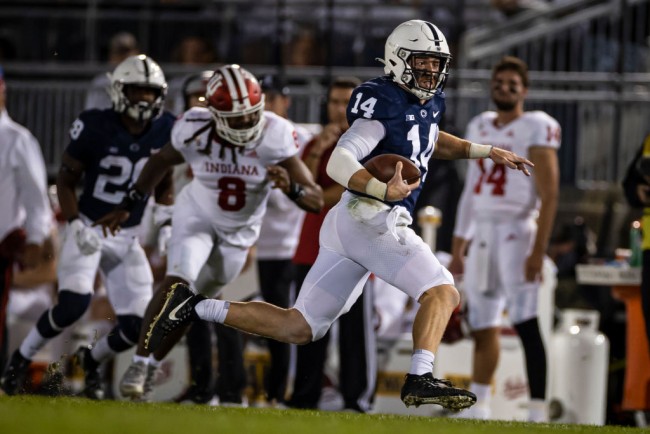 STATE COLLEGE, PA – Sean Clifford (#14) of the Penn State Nittany Lions scrambles during the second half of the game against the Indiana Hoosiers at the Beaver Stadium on October 2, 2021 in State College, Pennsylvania. (Photo : Scott Taetsch/Getty Images)

No. 3 Iowa and No. 4 Penn State will put their unbeaten records on the line when they go up against each other this Saturday in a critical Big Ten showdown. Both teams are playing some outstanding football of late, so expect a titanic showdown between these two conference rivals.

Who will prevail in this top-5 clash? Here’s our preview of this Penn State vs Iowa game.

Penn State’s hot start continued with an emphatic 24-0 victory over Indiana at Beaver Stadium. It was a huge result for the Nittany Lions, who improved their season record to a perfect 5-0 slate.

Leading the way for Penn State in this contest was its stellar defense. The Nittany Lions blocked a field goal, forced eight punts and two turnovers to earn the shutout win over the Hoosiers. It was the first time in two years that Penn State held an opponent scoreless. They are ranked third in the nation in scoring defense, allowing an average of just 12 points per game this season.

One guy who needs to step up for Penn State in the game against Iowa is Sean Clifford. He completed 17 of 33 passes for 178 yards with three touchdowns and one interception in the win against Indiana.

He has formed a connection with Jahan Dotson, who caught a pair of touchdown passes in the Week 5 win. They had now combined for 18 total touchdowns, the most in Penn State history for any quarterback-wide receiver combo.

The Nittany Lions had now won nine games in a row, with their last loss coming against the Hawkeyes last season. Last November, Penn State suffered a 41-21 loss to Iowa, a low point for the Nittany Lions, who started 0-5 for the first time in their 134-year football history.

They managed to turn things around and will be looking for a signature win over their rivals on Saturday to cement their spot in the top 5.

The Iowa Hawkeyes preserved their unbeaten record with a comprehensive 51-14 victory over Maryland. The Hawkeyes’ defense took center stage in that one-sided win, forcing the Terrapins to commit seven turnovers. With the victory, Iowa extended its winning streak to 11 games dating back to last season.

Iowa jumped to No. 3 in the AP Top 25 rankings after Week 5, its highest position since the 2015 Hawkeyes team was ranked third. Saturday’s crunch showdown with Penn State will be just Iowa’s sixth top-5 matchup in its history.

For the Hawkeyes to stretch their winning run against the Nittany Lions, they will need to continue their excellent play on the defensive end. They are second in the FBS in scoring defense, allowing an average of just 11.6 points per game this campaign.

Ten of the Best Cryptocurrencies to Invest this October Weekend