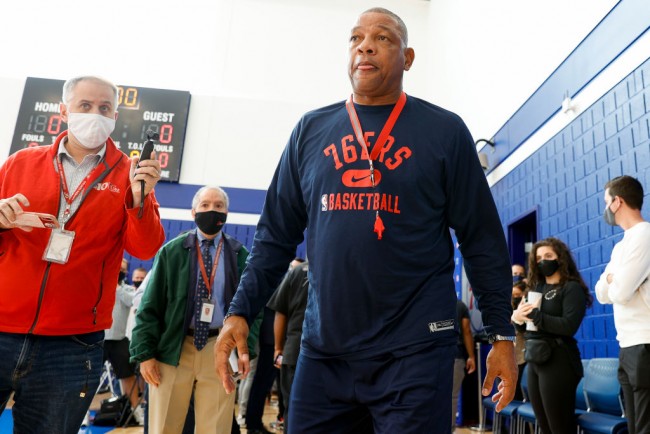 The ongoing dispute between Philadelphia and Ben Simmons took another dramatic twist on Tuesday when the team announced that the disgruntled star had been suspended one game for conduct detrimental to the 76ers. On Wednesday, Simmons will serve the suspension when the Philadelphia 76ers open their 2021-22 season against the New Orleans Pelicans.

Sources told ESPN‘s Adrian Wojnarowski that the latest snafu arose when Simmons declined several times to sub in for a drill during the Sixers’ practice. That drew the ire of head coach Doc Rivers, who decided to throw Simmons out of practice after his non-participation.

Rivers and Embiid fed up with Ben Simmons’ antics

Rivers did not mince any words when talking to reporters after Tuesday’s practice, saying that Simmons was a distraction for the Sixers today and that he did not want to do what everybody else was doing. Rivers added that Simmons leaving was not a big deal, and they just went on with practice after his departure.

Joel Embiid also shared his thoughts regarding the suspension of his All-Star teammate, telling reporters several times that it is not his job to babysit Simmons. Embiid said that he is trying to win, and for that to happen, you have to have that relationship with your teammates.

Embiid’s relationship with Simmons, however, appears to be damaged beyond repair, with the superstar center saying, “We don’t get paid to come out here and try to babysit somebody. So that’s not our job, and I’m sure my teammates feel that way.”

The relationship between Simmons and the Sixers started to fracture after their Game 7 loss to the Atlanta Hawks in last season’s Eastern Conference Semifinals. Simmons was blamed for the Sixers’ early playoff exit after his atrocious offensive performance in the series.

The Australian star demanded a trade shortly after, even holding out during the first two weeks of the Sixers’ training camp in an attempt to force Philadelphia’s top brass to make a deal. The 76ers were unable to find any suitable trade offers, though, forcing Simmons to report to the team last week in a surprise move.

It looked like Simmons was on his way to playing for the Sixers again after practicing with the team on Sunday and Monday. That all changed with his decision to skip practice on Tuesday, making it clear to all parties involved that he is done with the 76ers organization and that the main reason he showed up in Philadelphia is for him to collect his paychecks.

Simmons’ campaign to move out of Philadelphia has been costly for the Australian, with the Sixers already fining him $1.4 million for the four preseason games he has missed. Simmons, who has not earned any money since returning to the team on October 11, will lose another $227,000 due to his one-game suspension.