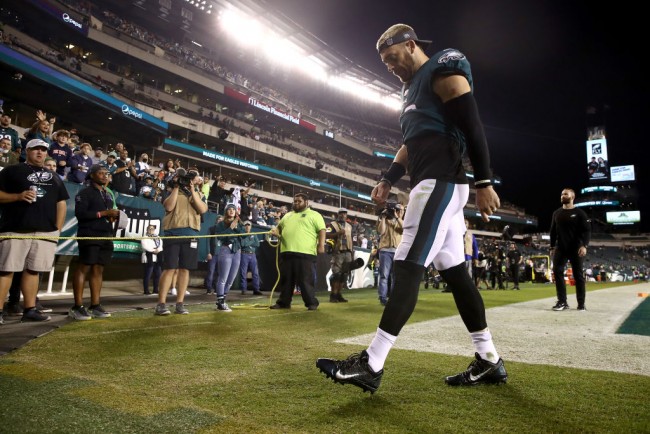 Zach Ertz’s time with Philadelphia has come to an end. The Eagles traded the three-time Pro Bowl tight end to the Arizona Cardinals on Friday in exchange for a 2022 fifth-round draft pick and cornerback Tay Gowan.

Ertz was emotional as he exited the field after Philadelphia’s 28-22 loss to the Tampa Bay Buccaneers on Thursday Night Football. Apparently, Ertz had advanced knowledge of the trade and was aware that this was his last game as a member of the Philadelphia Eagles.

In his final game, he did not disappoint, scoring a touchdown for the Eagles in the opening quarter against the Bucs. The Eagles made Ertz captain for the night, a fitting tribute to a player who has etched his name into Philadelphia sports lore.

Ertz had spent his entire career with Philadelphia since entering the NFL as a second-round draft pick in 2013, catching 579 passes for 6,267 yards and 38 touchdowns for the Eagles. He cemented his legacy in Super Bowl LII, scoring the game-winning touchdown against the New England Patriots to help Philadelphia secure its first Super Bowl title.

Zach Ertz had two of the biggest plays in Eagles history

One of the greatest Eagles of all time. Thank you for everything @ZERTZ_86 pic.twitter.com/HyLTBQ3Vtf

Relations between the Eagles and Ertz became strained this past offseason when both parties could not agree to a contract extension. Ertz, who is set to become a free agent in March, was granted permission by the Eagles to seek a trade, but the team could not find a suitable deal during the offseason.

The Eagles finally found their trading partner in the Arizona Cardinals, who lost their primary tight end target, Maxx Williams, to a season-ending knee injury this week. The Cardinals are off to a flying start this season, winning their first five games to sit on top of the NFC West.

In one response, Zach Ertz captures the key difference between those who succeed and are accepted in Philadelphia, and those who flame out. pic.twitter.com/g2sGK9wgS8

It will be interesting to see what Ertz can do in this high-flying Arizona offense. Even though Arizona targeted its tight ends the third-lowest amount in the NFL this season, the now-injured Williams was still on pace to record career highs in catches, yards, and touchdowns.

Ertz brings another dimension to a Cardinals offense that is ranked seventh in the NFL in passing. He joins an Arizona team with the talented foursome of DeAndre Hopkins, A.J. Green, Christian Kirk, and Rondale Moore. Ertz’s arrival will also provide a major boost to Arizona’s run game which is ranked eighth in the NFL at the moment.

In six games with Philadelphia this season, Ertz has recorded 18 catches for 189 yards and two touchdowns. However, Ertz will not be eligible to play for the Cards on Sunday against the Cleveland Browns, as the league prohibits players from playing for different teams on the same week.

Top Tips about the Career of a Robot Programmer in 2021