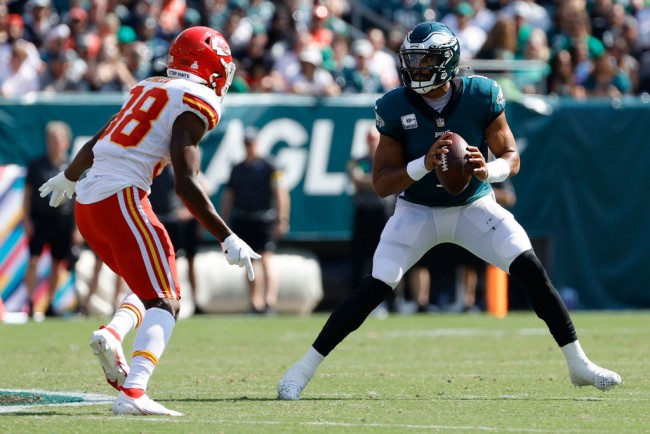 PHILADELPHIA, PENNSYLVANIA – Jalen Hurts (#1) of the Philadelphia Eagles is pressured by L’Jarius Sneed (#38) of the Kansas City Chiefs at the Lincoln Financial Field on October 03, 2021 in Philadelphia, Pennsylvania. (Photo : Tim Nwachukwu/Getty Images)

Nick Sirianni has had a horrible start to his career as Eagles head coach, losing three of his first four NFL games with Philadelphia. He hopes to stop Philadelphia’s three-game losing rut this coming Sunday when the Eagles face an injury-riddled Carolina side. Who will prevail in this Eagles vs Panthers clash?

The alarm bells are starting to ring for the Philadelphia Eagles, who sit at the bottom of the NFC East standings with an abysmal 1-3 slate after a 42-30 loss to the Kansas City Chiefs on Sunday. The Eagles had no answer for Chiefs star QB Patrick Mahomes, who threw five touchdown passes in Week 4.

It won’t get any easier for them in Week 5 as the Eagles will face a Panthers team that has yet to lose at home this season. It’s critical for Philadelphia that Jalen Hurts starts strong in this contest. He was solid against the Chiefs, completing 32 of 48 passes for 387 yards and a pair of touchdowns.

DeVonta Smith was the main beneficiary of Hurts’ outstanding performance on Sunday, logging in the first 100-yard receiving game of his NFL career. They will look to replicate that connection against a Carolina secondary that is missing its top cornerback.

One thing the Eagles must address in Week 5 is their penalty situation. The Eagles are the most penalized team in the NFL today, and mistakes crept in again in their recent loss to Kansas City. Philadelphia was penalized nine times for 49 yards against the Chiefs, which is why they ended up losing by 12 points.

The Carolina Panthers are no longer perfect after the Dallas Cowboys handed them their first defeat of the season in Week 4. The Panthers headed into the halftime break with a 14-13 lead but lost steam in the second half as Dallas ended up with a 36-28 win.

Even with the loss, the outlook is positive for the Panthers heading into their Week 5 clash against Philadelphia. According to head coach Matt Rhule, Christian McCaffrey, who was sorely missed in the loss to the Cowboys, could be available for the game against the Eagles.

Entering Week 3, McCaffrey was the NFL leader in terms of total yards from scrimmage with 324. He was on his way to another solid performance against the Texans, recording 40 yards before suffering the unfortunate hamstring injury.

If McCaffrey still cannot play against Philadelphia, Rhule will once again turn to Chuba Hubbard, Rodney Smith, and Royce Freeman for his ground game. Hubbard led the trio in the loss to Dallas, rushing for 57 yards on 13 carries.

They also have quarterback Sam Darnold, who has been a legitimate threat on the ground for Carolina through its first four games. He had two rushing touchdowns in the loss to the Cowboys to increase his total to a league-leading five scores.

Carolina wins and covers the spread.