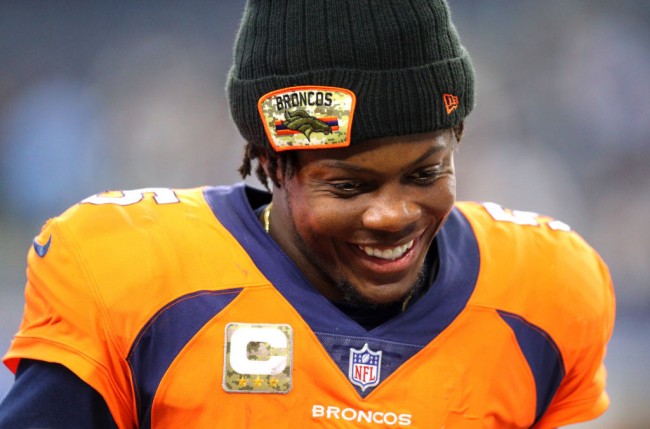 ARLINGTON, TEXAS – Teddy Bridgewater #5 of the Denver Broncos reacts as he walks off the field after defeating the Dallas Cowboys 30-16 at AT&T Stadium on November 07, 2021 in Arlington, Texas. (Photo : Richard Rodriguez/Getty Images)

The Denver Broncos will head back home with momentum on their side after trouncing the Dallas Cowboys in Week 9. The Broncos stunned the highly favored Cowboys, storming to a 30-0 lead before settling for a 14-point win in the end. Can they record their third consecutive win against a struggling Philadelphia side in this Eagles vs Broncos showdown? Here’s a breakdown of this matchup.

Philadelphia’s losing woes show no sign of ending as the Eagles suffered a 27-24 defeat at the hands of the Los Angeles Chargers in Week 9. The Eagles have now lost six of their last eight games to drop to 3-6. They failed to take advantage of Dallas’ shock loss to the Denver Broncos as they remained 3.5 games behind the Cowboys in the NFC East standings.

The Eagles will look to get their season back on track when they travel to Denver to face the Broncos. It is important for Philadelphia that Jalen Hurts gets his game going in this matchup. He completed 11 of 17 passes for 162 yards with one touchdown and no interceptions in the loss to the Chargers.

The Eagles need to establish their run game against the Broncos for them to pull off the road win. They did just that in the game against the Chargers, running for 176 yards and two touchdowns in Week 9. Jordan Howard and Hurts combined for 133 rushing yards and a score in the loss to LA. They will be tested, though, by a Denver defense that’s allowing just 98.3 yards per game against the run.

The Denver Broncos extended their winning streak to two games with a stunning 30-16 victory over the Dallas Cowboys at AT&T Stadium. Teddy Bridgewater starred for the Broncos, who moved to within a half-game of leaders Las Vegas Raiders and Los Angeles Chargers in the AFC West standings.

He completed 19 of 28 passes for 249 yards and a touchdown in the win against the Cowboys. Bridgewater is the third-most accurate passer in the NFL this season at 70.2 percent. He will be licking his chops at the prospect of facing an Eagles defense that has struggled to contain the pass this season.

Teddy Bridgewater with a 25-yard checkdown to Jerry Jeudy pic.twitter.com/wVO7TMDO8N

They have allowed seven quarterbacks to top Bridgewater’s 70.2% completion rate, with Derek Carr, Justin Herbert, Tom Brady, Dak Prescott, and Patrick Mahomes even completing 80 percent of their passes against the Eagles.

The Broncos’ ground game was also working in the win against Dallas, racking up a season-high 190 yards rushing in Week 9. The bulk of those came from Javonte Williams, who recorded his first 100-yard game in the NFL.

Denver wins and covers the spread.

The basics of Cyber Security Everyone should know!

Top 10 Easiest Programming Languages for the Students in 2021