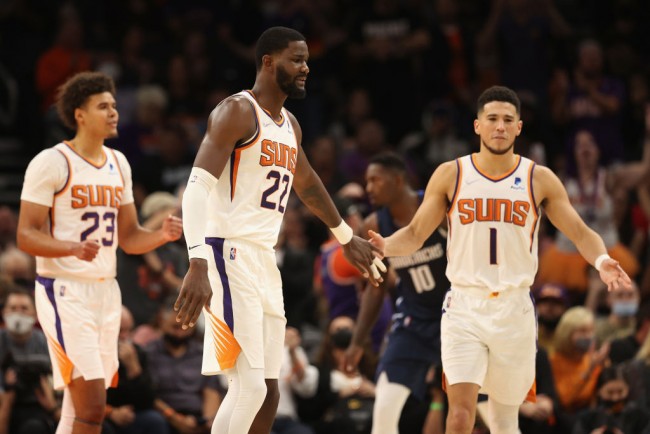 PHOENIX, ARIZONA – NOVEMBER 17: Deandre Ayton #22 of the Phoenix Suns high fives Devin Booker #1 after scoring against the Dallas Mavericks during the second half of the NBA game at Footprint Center on November 17, 2021 in Phoenix, Arizona. The Suns defeated the Mavericks 105-98. (Photo : Christian Petersen/Getty Images)

The Phoenix Suns stretched their unbeaten run to 10 games with a nerve-wracking 105-98 win over the Dallas Mavericks. Six players scored in double-figures for the Suns, who moved to within one game of leaders Golden State Warriors in the Western Conference standings. The Suns’ 10-game winning run is their longest winning streak since the 2009-10 season which featured legends such as Steve Nash and Amare Stoudemire.

Devin Booker led the way for Phoenix in the hard-fought win, scoring 24 points and grabbing nine rebounds. He delivered the dagger with 50 seconds remaining, burying a long off-balance attempt from deep to seal the win for Phoenix.

Deandre Ayton was outstanding once again for the Suns in his second game back from injury, registering another double-double with 19 points and 13 rebounds. Jae Crowder and Mikal Bridges stepped up big time with Chris Paul firing blanks, combining for 24 points, 18 of which came from the 3-point area.

Many expected the Suns to ease past the Mavs with superstar Luka Doncic sidelined because of knee and ankle injuries. Doncic suffered the left knee and left ankle sprains with 44 seconds remaining in Monday’s victory over the Denver Nuggets. Austin Rivers fell onto his leg after he contested a driving layup by the Nuggets guard.

Doncic was seen hobbling after that unfortunate collision, with the Slovenian star clutching his left ankle before going to the Mavs’ locker room. Doncic has a bad history with ankle injuries, missing 11 games in the 2019-20 season because of a sprained right ankle. He also played the last three games of Dallas’ 2020 playoff series with a left ankle sprain.

Mavs trouble Suns even without Doncic

Even without Doncic, the Mavericks still put up a strong fight against the red-hot Suns. The Mavs used a balanced scoring attack to keep the game close with Tim Hardaway Jr., Kristaps Porzingis, and Jalen Brunson providing the much-needed offense. They scored 22, 21, and 18 points, respectively, against the Suns.

The Mavs looked to be on their way to recording a memorable upset win as they entered the fourth quarter with a 73-68 advantage. There is no quit with the surging Suns, though, with Booker finally giving Phoenix its first lead in the fourth quarter, scoring a driving layup with 5:32 remaining.

The stage was set for a dramatic finish after Jalen Brunson knotted the score at 96-all with 2:42 left in the game. The Suns showed their composure down the stretch, though, going on a 9-2 run to finish the contest.

Both teams will face each other once again on Friday in an immediate rematch. A major reinforcement might be on the way for the Mavs as they have not ruled out Doncic for that game. Doncic has been superb for the Mavs this season, averaging 24.9 points, 8.3 rebounds and 7.9 assists per game.

10 Most Important Bitcoin Moments in 2021 to be Remembered

Bitcoin Influencing 42.97% of the Crypto Market